The Cupertino goliath’s week-long annual WWDC kicks off in San Francisco on June 13. The major WWDC announcements of this year do not include any hardware. It will majorly revolve around the Artificial Intelligence and Siri.

Merely a few hours are left before one of the most anticipated technology events of the year kicks off. Apple fans, developers, investors, and shareholders are looking forward to the event to take place. Apple is certainly not going to make any major announcements, for instance, the release of iPhone 7, a new MacBook, or an iPad, but the software announcements are going to take the center stage this year. One more element, which is making the anticipation of the World Wide Developers Conference worth exciting is the announcement related to iOS apps launching on the Android platform. Yes, for many individuals this news may arrive as a shock, but it’s true. Apple is looking forward to offering a friendly hand to Google’s Android in order to make itself a healthy competitor in the market. For so long, Apple has been criticized for not launching any Apple compatible with Android platform, but it seems Apple is going to make their dreams come true this WWDC.

This time, the WWDC is going to play a very important role in Android market as well due to which heavy amount of Android users and developers will be tuning into the Apple’s annual World Wide Developers Conference.

Sure, for the individuals watching this conference live at the venue or on the YouTube, there will be instances when they are going to be bored to death. After all, software announcements do not remain fascinating if they are dragged for longer hours. But, Apple has a solution for this. The company understands that even the geekiest of all is prone to feel boredom. So, they have invented Apple Keynote Bingo. 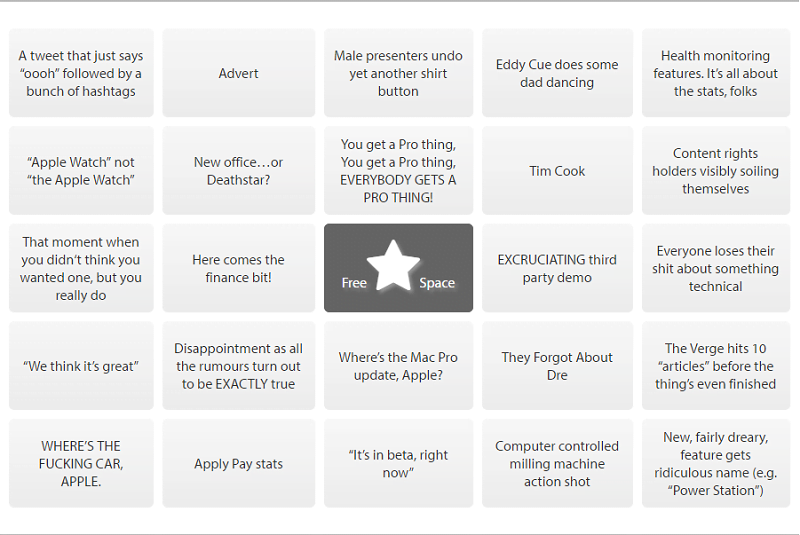 Steve Jobs used to take the center stage twice a year for sharing his vision with the masses. WWDC is like a wildly celebrated holiday for Apple fanatics all over the world. Thousands of individuals have followed the major keynotes with Apple Keynote Bingo since 2006. The WWDC 2016 will be no different.

Also Read: Everything you need to know about Apple before WWDC 2016 conference

The breathtaking experience of Bingo generates a template for you out of 100 possible keynote events. Press the button when one of the events mentioned on your template begins. When you’re able to get 5 buttons in a diagonal, row, or column you have to yell ‘BINGO’! (The yelling part is not for the individuals sitting in the conference hall, though.)

In a quick glance, the rules of Apple Keynote Bingo are:

There you go. Bingo!

Stay tuned to catch the fresh updates on WWDC 2016.