A group of engineers from the University of California San Diego have created a squid-shaped robot that can swim untethered and propel itself by generating jet streams of water. The robot has its power source inside its body and can also carry a camera for underwater exploration.

“We recreated all the primary features that squids have and use for super-fast swims,” stated Michael T. Tolley, one of the senior authors and a professor in the Department of Mechanical and Aerospace Engineering at UC San Diego. “This is the first untethered squid robot that can create jet pulses for a fast movement like the squid and can also achieve these jet streams by changing its body shape. These features improve their swimming efficiency.”

The squid robot is created mostly from soft materials like acrylic polymer, with a few 3D printed and laser-cut parts and considered amid top technology innovation. It is essential to use soft robots in underwater exploration expeditions as it is imperative and to protect fish and coral kinds. Rigid robots may hurt fishes and damage corals. However, soft robots move fluidly and have difficulty manoeuvring. The research team includes prominent roboticists and experts of computer simulations and experimental fluid dynamics.

These experts have resorted to cephalopods as an excellent model to solve these issues. Squid, for example, have the super fastest speeds of any aquatic invertebrates because of its jet propulsion mechanism. The squid robot they created intakes a large volume of water into its body and subsequently stores elastic energy in its skin and flexible ribs. After that, it releases this elastic energy by compressing the body and generating a jet stream of water to propel itself forward. 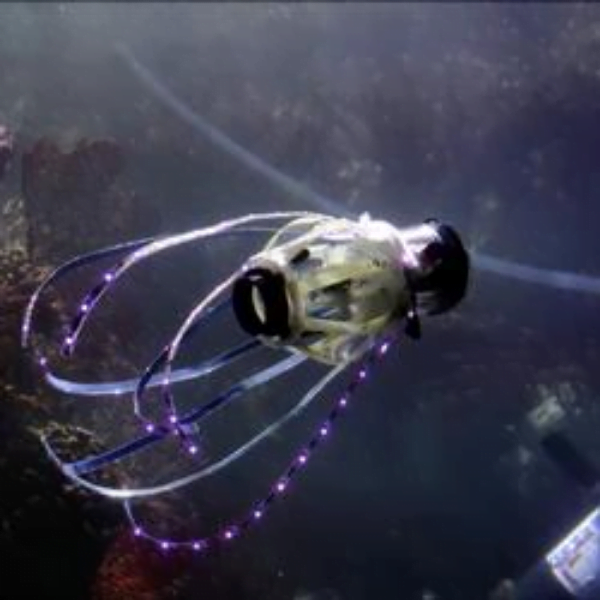 While at rest, the squid robot looks like a paper lantern, with its flexible ribs that act like springs. The ribs are virtually connected to two circular plates located at each end of the robot. One of the plates is connected to a nozzle that intakes the water volume and ejects it when the robot’s body contracts. The other plate can carry a water-proof camera or any other sensor required.

The squid robot was first tested in a water testbed of the lab of Professor Geno Pawlak, in the UC San Diego Department of Mechanical and Aerospace Engineering. After that, it was taken out for a swim in a tank at the UC San Diego Birch Aquarium located at the Scripps Institution of Oceanography. The team demonstrated that the robot could easily steer by adjusting the direction panel of the nozzle. The robot’s speed was clocked at about 18- 32 centimetres per second, which is efficiently faster than most soft robots.

“Once we optimized the robot’s design and made it perfect for swimming in a tank, it became especially exciting to see that the squid robot was also able to successfully swim in a huge aquarium among the coral and fishes. It effectively demonstrated its feasibility for real-world applications and purposes,” stated Caleb Christianson, who led the research study as a part of his PhD work in Tolley’s research group.

Researchers earlier conducted several experiments to get the optimal size and shape for the nozzle that would be extensively to propel the robot. The experiments also helped them to improve the robot’s efficiency and its ability to manoeuvre and move faster. The faster movement was mostly done by simulating the jet propulsion. This work was led by Professor Qiang Zhu and his team in the Department of Structural Engineering at UC San Diego.