Sagrada Game Review: It plays true to the board game 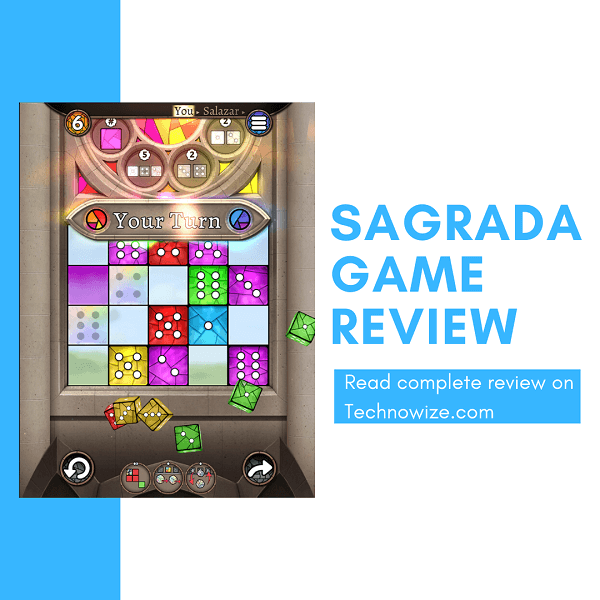 Sagrada is a game of methodically creating stained glass windows as per the particular patterns available, but it is lining up the dice according to three criteria. Though the task seems easy, it is much difficult and almost impossible.

The game starts with each player selecting a window pattern, then slotting that pattern into the cardboard window frame. The designs have specific names, and they lay out the First Rule of Dice Club. As per the First Rule, the player places the dice, representing the coloured panes of glasses according to the patterns. Like, a five should be placed on a space calling for a five and a yellow upon a space seeking a yellow. Each card in the game comes with a difficulty rating. The harder the card, the more favour tokens it gives to the player. At the beginning of the game, three randomly selected tool cards are available for each player which lets them modify the dice in their way. After that, the players engross into the game through dice drafting.

There is also the Second Rule of Dice Club. The rule states that dice of the same colour should never be placed next to one another. The dice can be placed diagonally, but the edges can never touch. The game has many dice and spaces where the player can place things. Every time a player plays Sagrada, the deliverance comes from three different public cards that engross the player. The game also has a private victory condition, where points are awarded according to how much the player uses a certain colour.

There is also the Third Rule of Dice Club, which states that the dice showing the same value cannot be placed next to one another. The dice value represents the colour shade. The Sagrada game would be much easier if the player could drop dice anywhere. But it is important to remember that a player should always work out from a single corner, space by space, narrowing the scope. This gives the game a natural arc from the regular technique.

While Sagrada is an ever-evolving challenging puzzle that gets harder with time, it will always be a personal puzzle for the player. Though a player can never touch a neighbour’s dice, they can at least deny them at first, which is why this game turns up as a good game for just two players. This comes as a face-off, where there’s a more acceptable balance between merely taking the competition benefits the player to trying to steal the dice that could be of help to the opponent.

Sagrada isn’t just a regular puzzle card game; it does reward planning for players. That said, each Sagrada game would be going to feel similar to the last move, and while there is a choice of selecting different patterns and victory conditions, these don’t change the tactics or the arc of the game. The tools are the best way to mix things up in the game, and having only three of these available each time seems like a limitation. In the end, players are left asking for more from Sagrada game. Though it may seem like a simple puzzle game to some players, it is also a fantastic little puzzle, despite not giving much variety and choices to the player!