Galaxy S20 Tactical Edition, launched by Samsung recently, is a smartphone for the Department of Defense operators and the federal government. It is based on the proven success of the previous Galaxy S9 Tactical Edition and promises to be a ‘massive leap forward in tactical mobility’ to achieve military objectives in any tactical environment.

The new edition uses an Android operating system and has the capacity to integrate with drone feeds, radios and GPS. The Samsung phone is said to have been tested and fielded in special operations and publicizes it as the ‘only end-user device one will need for mission planning, training, operations and daily use’. It can reportedly also connect with tactical radios and mission systems to increase situational awareness and keep communications open in multi-domain environments. 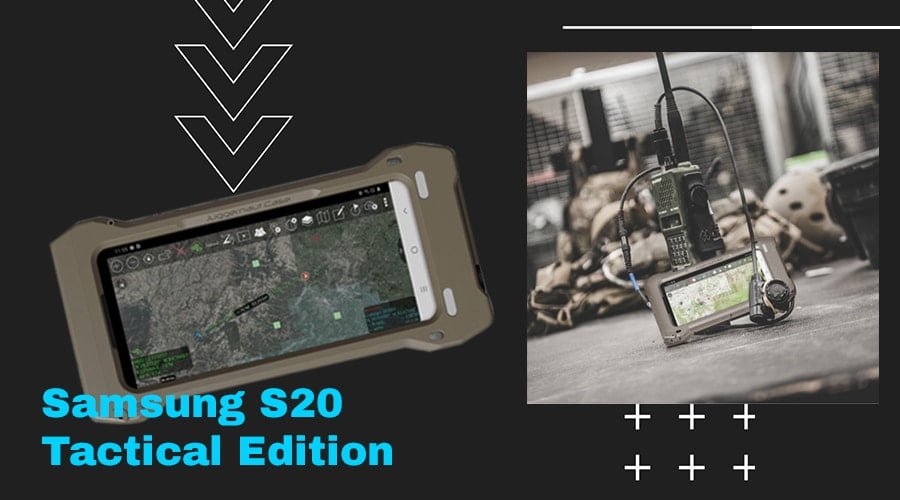 The Galaxy S20 Tactical Edition is available only in the US to be purchased through specific vendors for the Department of Defense and federal government and is not for general sale.

The smartphone is creatively tailored to assist the tactical teams and operators to quickly and securely process and share mission data across complex terrains, expansive distances between troops and with Command. It is a mission ready solution to address such unique issues and specific needs. It has a pre-configured software that can support tactical radios, laser range finders, drone feeds, external GPS and overall a quite complete view of the mission. There are a variety of durable ruggedized cases, hubs and connectors to fit in any tactical kit for multi-mission potentials.

It also has multiple carrier networks that facilitate use of private SIMs 5G, WiFi 6 and CBRS. Its powerful and efficient 64-bit-Octa-core processor is capable of operating mission applications in the field and enterprise applications anywhere else that the mission takes place.

Some of the exclusive tactical features that the Galaxy S20 possesses are Lock Screen Auto Rotate, Night Vision Mode, Stealth Mode, Dynamic AMOLED 2.0 – a 120Hz display, pro-grade 64 MP camera for high resolution images and 8K video and more fast delivery of information access that the operators need. It is, although a handheld device, but can also be easily connected to a monitor for mission planning purposes. There is also a smart battery available that optimizes application power for conservation of energy.

A special remapped key button is made available on the side for quick one-touch launch/hide of launch mission applications that includes ATAK, APASS and BATDOK. It also features auto-touch sensitivity that automatically adjusts Galaxy S20 TE operation to work even for gloved hands.

This military smartphone is enabled to be used for classified communications. This new Galaxy S20 Tactical Edition has certifications that include NSA’s CSfC Component’s List, DODIN APL, FIPS 140-2, NIAP Common Criteria/MDFPP, DISA Android 10 STIG and an IP68 rating. Designed with two layers of encryption, the phone keeps data safe even when the phone is turned off or in an unauthenticated state. Along with this, its DualDAR enables confident storage of up to top-secret data on the device.

In terms of defense-grade security, its Knox security platform provides agencies with a proven and trusted device for secure voice, video and data communications. The smartphone has a secure telemedicine platform wherein medics can also monitor patients’ vitals remotely and arrange a medical evacuation.

According to Samsung Electronics America VP of sales, Chris Balcik, “We worked diligently with the industry’s most trusted companies to ensure best-in-class software, services, and hardware solutions perform with our devices”.

Every year realizes a mound of numerous Android phones released into the market. Some are good, some are bad. Some are certainly exciting, whereas others are a jiffy boring. Among all of the handsets to come out during a given year, one release that’s frequently met with a lot of enthusiasm and fanfare is Samsung’s Galaxy S series.

One could debate that Galaxy S phones aren’t constantly the most motivating, but there’s no denying how much more consideration they get associated to much of the competition.

For 2020, Samsung launched a trio of phones with the Galaxy S20, S20+, and S20 Ultra. These are actual technically inspiring gadgets with high prices to match, and if you can afford what Samsung is asking for the phones, they’re destined to be some of the best the Android landscape sees all year.

From hands-on coverage, detailed specs, accessory recommendations, and so much more, here’s unconditionally everything you need to know about the Samsung Galaxy S20 family.

Buy the Galaxy S20 and how much does it cost?

Now that we’ve touched the end of this guide, it’s time to talk about everyone’s favorite subject — price.

You can elite up the S20 at most chief carriers and retailers in the U.S., with many of them offering substantial promotions and discounts to assistance you save some cash. Right now, Samsung is offering up to a $450 prompt credit when you trade-in a suitable device.

Outside of Samsung, you’ll also bargain deals from Amazon, Verizon, T-Mobile, and plenty more. The S20 lineup is certainly expensive, but if you distinguish where to look, it’s fairly easy to save a lot of money.

Following the release of the Galaxy S20 series, Samsung thrown a follow-up to it in the form of the Galaxy S20 FE (Fan Edition). It has virtually all of the same specs as the regular S20, but it swaps out the glass back for a plastic one, has somewhat less RAM, and a squeezed camera system. Everything else is fundamentally the same, which is darn inspiring when you factor in the FE’s $700 retail price.

While phones like the S20 and S20+ are still prodigious purchases, the S20 FE now makes them a tougher sell. They’re bizarre if you have a ton of cash to devote and famine the best Galaxy phone money can buy, but the S20 FE and its noticeably lower price drive a hard bargain. For those $700, you’re still getting a 120Hz AMOLED display, Snapdragon 865 processor, a huge 4,500 mAh battery, and triple rear cameras that take outstanding photos.

We came away rather enthralled with the Galaxy S20 FE in our full review, going as far to say that it’s “the new flagship killer.” If you’re attentive in the S20 experience but are trying to watch your budget, this is undeniably a phone you should consider.

Have You Reviewed the Galaxy S20?

Before you hangout too deep into this guide, an upright place to start is by checking out our full reviews of the S20 lineup.

As you’d doubtless expect, the S20 Ultra is a certainly good phone. Its 120Hz AMOLED display is a thing of prettiness, Samsung’s build eminence is as good as ever, and the upgraded camera system is a lot of fun to shoot with. Samsung went all out with the phone, and the end result is a device that packs in just about every feature conceivable.

We don’t guilt you for wanting an S20 Ultra of your own this identical second, but keep in mind that it is not a seamless phone. The 120Hz refresh rate is an enormous drain on battery life, Samsung’s in-screen fingerprint sensor is a pain to use, and there’s no getting around the $1,400 asking price.

Otherwise, you could just get the Galaxy S20+ . It’s $200 less than the S20 Ultra while being every bit as respectable. The digital zooming isn’t pretty as impressive and the battery is smaller, but it’s also much easier to knob thanks to its smaller size and puts a meaningfully lesser dent in your wallet.

Then, there’s the baby Galaxy S20. You might be tending to think that the baseline S20 is the least exciting on the bunch, but it’s essentially the one we’d endorse to most people. It has the smallest price tag, is easy to use in one hand, and offers fundamentally all of the same features of the more expensive S20+.

No matter which phone you end up picking, you can rest guaranteed you’re getting one of the best Android phones of the year.

Which Galaxy S20 model should you buy?

Speaking of the diverse models, let’s take a closer look at what each one is bringing to the table.

At their core, the S20, S20+, and S20 Ultra are very similar. All three phones have 120Hz displays, Qualcomm’s Snapdragon 865 processor, stretchy storage, water resistance, and wireless charging. However, similar to what we proverb last year with the S10e, S10, and S10+, there are also clear variances between them.

While the S20 isn’t inexpensive with a starting price of $1000, it is the lesser phone of the trio. It has the fewest cameras, smallest battery, and doesn’t connect to mmWave 5G networks. Then again, it’s the S20 version that’ll put the smallest dimple in your wallet and is a good choice if you prefer phones with smaller screen sizes.

In the central of the bunch is the S20+, offering meek improvements in all of the areas where it differs from the regular S20. If you step all the way up to the S20 Ultra, you’re getting the prime and saddest S20 experience possible — though it is going to cost you.

What specs does the Galaxy S20 have?

Samsung doesn’t muddle around with specs for its Galaxy S phones, and that awareness has carried over to the S20 lineup.

Whether we’re speaking about the S20, S20+, or S20 Ultra, these are flagship phones through and through. As such, you’ll discovery flagship specs in just about every regard.

Here’s a quick rundown of what they’re packing.

Galaxy S20 vs iPhone 11: Comparison between the Giants!