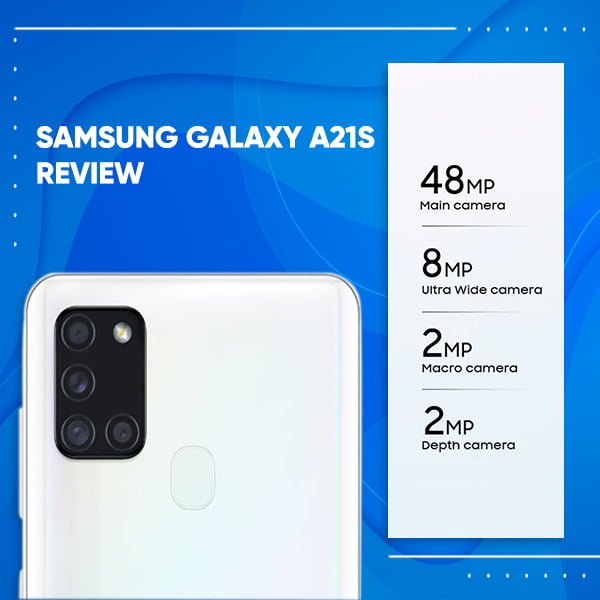 The A21s has an eyeball-grabbing design with a plastic back, and a gradient finish. The backside is kept plain, with no engravings or patterns. The device has a classy look and feels good on the hand. The front side has a 6.5-inch Infinity-O display, with a punch hole towards the left corner, and an LCD panel with HD+ resolution. The device has a rear-facing physical fingerprint reader.

There are four cameras on the Galaxy A21s. Two of them— the depth and macro cameras — are equipped with 2-megapixel sensors. The depth camera is primarily used for background blur in bokeh photos. There is also a macro camera in the device. The primary camera of 48 megapixels gives detailed and superb quality photos. There is, however, no dedicated Night mode, slow motion and hyper-lapse modes. The ultra-wide camera is useful, though it has an average picture quality.

The Galaxy A21s performance is average in comparison to its counterparts.

The Galaxy A21s is the first Samsung Galaxy phone to have a Core version of One UI 2.1. having the Core tag means it has basic features like the Galaxy M series phones. The phone has Android 10 features like Digital Wellbeing and Google’s navigation gestures, and Samsung features like theme support, Dual Messenger, Game Launcher, as well as One-handed mode.

The Galaxy A21s doesn’t come with earphones, and one has to purchase them separately. The speaker is of good quality with Dolby Atmos support, which works both in wired and Bluetooth audio. The call and audio quality is good with enhanced stereo and surrounds effects from Dolby support.