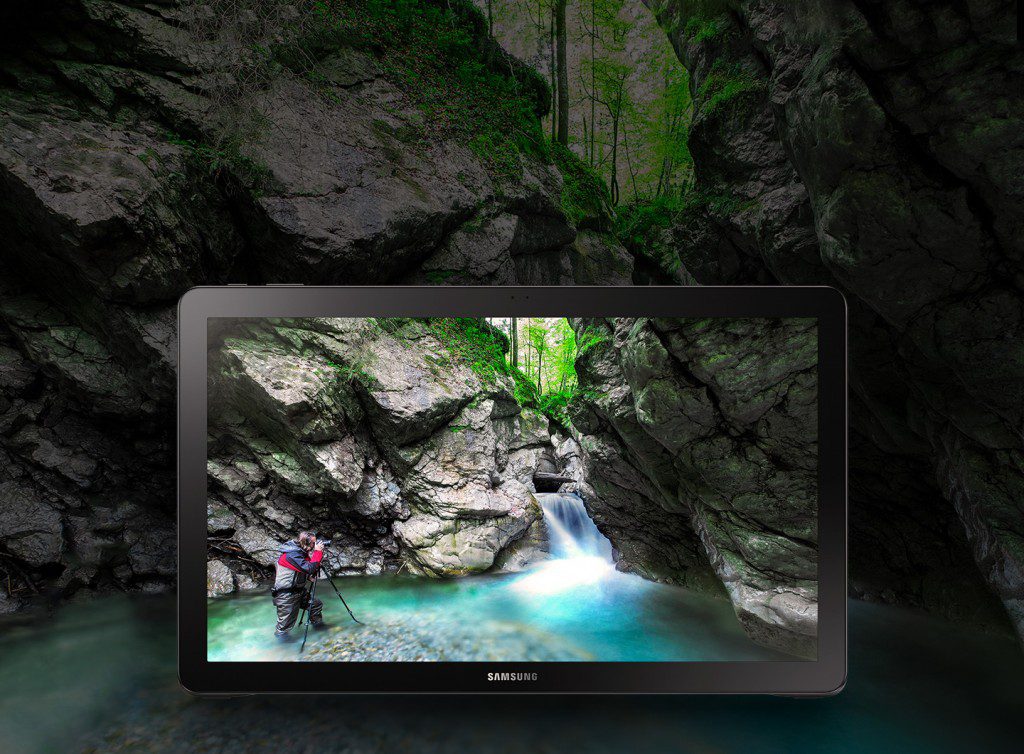 Samsung Galaxy View is the best alternative for you if you love watching TV on your laptop.

In our overall Samsung Galaxy View review, we found that this tablet is smaller than a Television but larger than a laptop. It is a new kind of hybrid tablet, which suits everyone who is a die-hard fan of watching the video and uses a supplementary screen due to lack of space. The Galaxy View is unlike other tablets you have seen. Perhaps, it is not a tablet at all. Either you buy the magical slab or not, Samsung has brought its ‘VIEW’ to the US.

The new device by Samsung can be well described a portable TV powered by Android. The image of this tablet is being reinforced in markets, as it will be providing Live TV broadcast. The form and size of the device are suitable for viewing contents from a good table distance, unlike laptops that keep people glued to the screens. The better screen size and a good inbuilt stand permit you to set up the tablet either in a slightly elevated form or like the computer screen. The choice is yours.

The giant 18.4- inch teeter in the territory of TV with the main screen is dedicated to popular sites like Netflix. Since there are no HDMI ports or Ethernet, it neither has a keyboard nor a remote, so it isn’t exactly a compact and mini- smart television. Instead, Galaxy View is full of Android capabilities and it directly accesses all kinds of apps from Google Play Store.

Let’s take an insight into our Samsung Galaxy View review.

Why go for a Tablet instead of TV?

You would choose a tablet over a laptop or a laptop over a TV; because it’s a convenient and portable choice. Similarly, you can choose this latest tablet by Samsung instead of a TV. Definitely, it is the bigger form of version for a tablet, and way bigger than the upcoming Apple iPad Pro, a 12.9-inch tablet. The behemoth features a very handy in-built groove with a handle that makes the device portable to be moved in different places, a slot for SIM card to access The internet on the go, and a micro-SD card slot. The downside of the device is a bit flimsy, and the plastic construction used for inbuilt kickstand is quite cheap. Further to add more to the misery, the device lacks HDMI port and speakers are very weak, so viewing a show from a distance or no distance doesn’t matter as you will have to pop headphones in your ears all the time in any way. The Samsung Galaxy View Price is set to a whopping price of $599. If you are one of those people who are low on space but bigger in cash, the Galaxy View is a great option to feed your needs. The lofty price of this tablet remains a bitter pill to swallow. 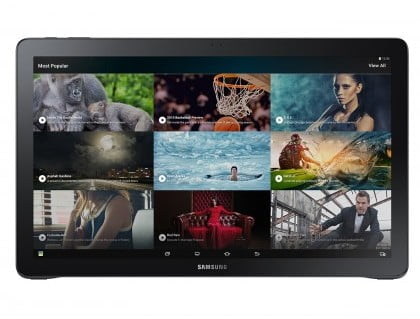 In our Samsung Galaxy View review, we found that it gives an uncanny reminder of a plastic binder clip. The supplementary panel on the back is flat on the back until you reach the top quarter of device. It rotates about 45 degrees at a point. The slightly curved part of the panel houses a handle that is oval shaped in the middle, which is fixed via hinges made of plastic. It can be settled in two different positions, the first one allows the tab to stand upright and the second one allows it to lay down at a specific angle and also allows easy transportation of tablet by releasing handle. The inbuilt stand is utilitarian, but it feels wonky and cheap.

There is no availability of a back profile option as the rear panel is irremovable, and the mechanism is not very suave, either. The rear panel made out of plastic gives a bit rickety feeling and it can bend easily under stress.

The Galaxy View is portable, but it certainly does not mean it is a mobile phone. Due to most of the structure constructed out of plastic, to carry the device for a longer period of time can be a cumbersome task. You can easily carry it from your bedroom to the kitchen but carrying it while on a vacation might be a bit uncomfortable due to its large size and weight. The rear panel is protruding in a way as it cannot lay flush to the edge of the tablet.

The Galaxy View is supposed to be a bigger screen tablet unlike the existing ones, but there are plenty of things that need to be worked out.

The Ins and Outs of the tablet 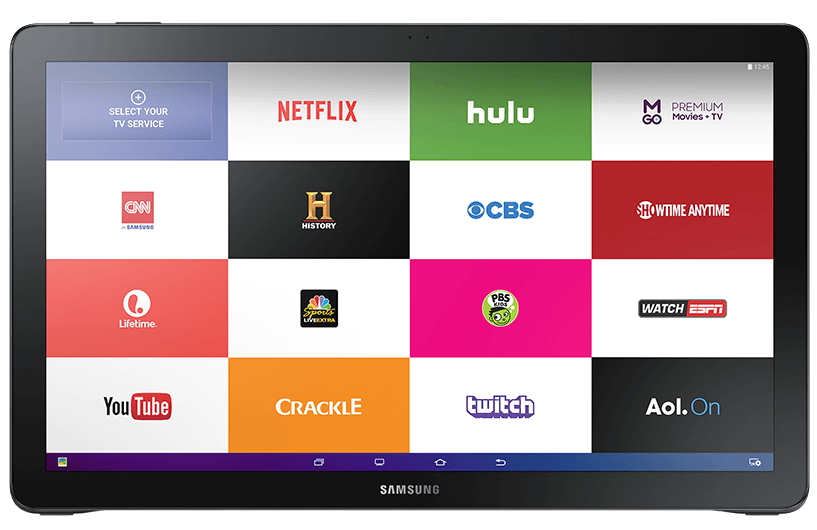 In our Samsung Galaxy View review, we came to know that the large display screen is Full HD 1920×1080, which means say goodbye to contents in 2K and 4K for you. The operating system runs on Exynos 7580 1.6 GHz Octa-Core processor with 2 GB RAM and internal storage of 32 GB. The battery is 5,700 mAh, which lasts 8 hours of perpetual video binging. The Samsung Galaxy View specs are a slight disappointment for tech aficionados.

The home screen layout is similar to Roku Smart TV, which is available for $300 that is half the price of this 18.4-inch tablet. The version for the device is Android 5.1 Lollipop along with TouchWiz Samsung’s overlay feature; it works similar to any other tablets by Samsung. No typical screen full of app shortcuts and widgets, instead, the button situated in the middle of navigation bar directs you to a vibrant page full of 4×4 rectangle grids on edge-to-edge. Basically, it drives the idea that the 18.4-inch tablet is a mini android powered TV. 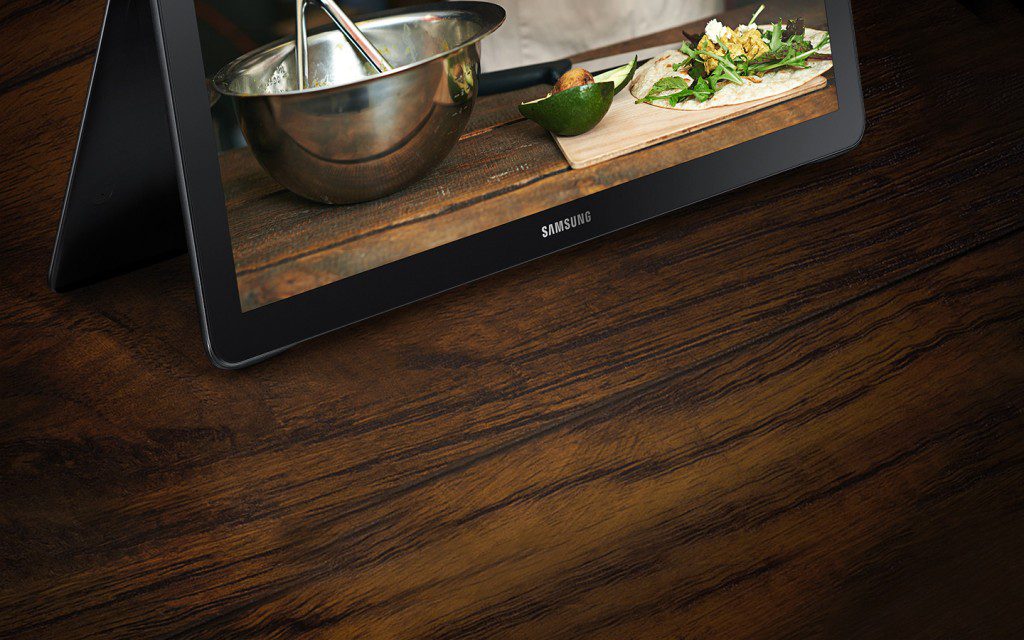 Just for your knowledge the other Samsung Galaxy View specs includes the fastest 4G Wi-Fi standards and the latest Bluetooth version. So you don’t need to worry about the latest streaming episode of Game of Thrones in HD.

Our overall note on the Samsung Galaxy View review is that the idea of a huge Android tablet, which can almost be double as your coffee table is quite good in some ways. The tablet is a slick one that will serve you as an alternative to TV. All you need to do is just stay prepared to pay a hefty price for the portability privilege.