Samsung heir Lee Jae-yong has been sentenced to two and a half years’ prison term over his involvement in a bribery scandal in 2015. The corruption scandal led to the ouster of the then South Korea President Park Geun-hye, who herself is facing a long prison term.

In a retrial on Monday, the Seoul High Court found Lee guilty of bribing President Park Geun-hye and her close confidante to approve a merger of two Samsung affiliates in a bid to increase the size of the conglomerate. 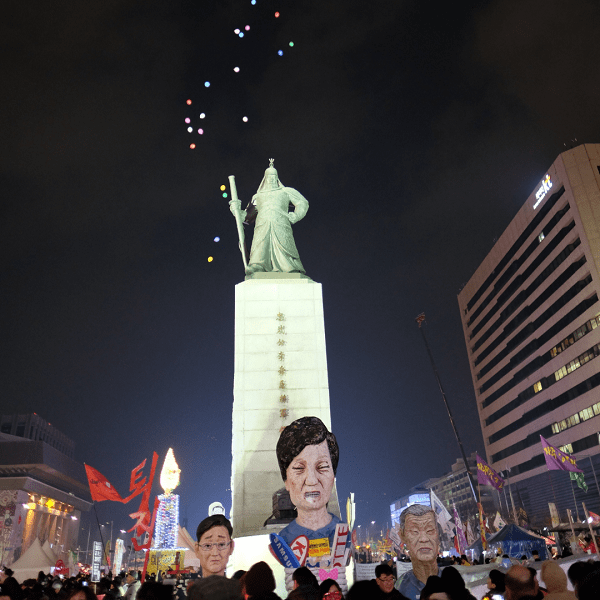 People at Gwanghwamun Square calling for punishment of president Park Geun-hye and Samsung chief Lee Jae-yong who has been questioned in corruption probe. (Image Credit: Shutterstock)

According to the court’s verdict, Lee “actively provided bribes and implicitly asked the president to use her power to help his smooth succession” at the head of Samsung.. The court found Lee guilty of bribery, embezzlement and concealment of about 8.6 billion won ($7.8m; £5.75m), and said the independent compliance committee Samsung set up early last year has yet to become fully effective.

News of his jail terms sent Samsung share prices tumbling by about 4%. The ruling will also have ramifications over his control over the electronics giant. Lee took over the company in 2014 after his father Lee Kun-hee suffered ill health due to heart problems. Lee helms the Samsung group in his capacity as vice president of Samsung Electronics, one of the world’s largest makers of computer chips and smartphones.

The elderly Lee died last year. A shake-up at Samsung is imminent now. A massive inheritance tax bill among heirs is sure to add to the problems.

Lee’s jail term will create a leadership vacuum in the company, with decision-making powers now out of his hands. “It’s really a huge blow and a big crisis for Samsung,” Kim Dae-jong, a business professor at Sejong University, told news agency AFP.

“The nature of this case is the former president’s abuse of power violating corporate freedom and property rights. Given that nature, the court’s decision is regrettable,” Lee’s lawyer, Lee In-jae, told reporters.

The lawyers say that the 2015 deal is part of normal business practice and he was more a victim of political shenanigans than a perpetrator.

It wasn’t immediately known whether he would appeal his sentence.

The prosecution had sought a nine-year prison term for him. Lee has already spent some time in prison, which will be counted as part of his punishment term.

Lee, 52, was sentenced in 2017 to five years in prison for his misdeed of bribing Park and her longtime friend Choi Soon-sil.  He was freed in 2018 after the Seoul High Court reduced his term to 2 years and suspended his sentence, overturning some key convictions. The case was then sent to the Supreme Court, which found that the charges against him had been watered down, and sent the case back to the Seoul High Court, which issued Monday’s ruling.

Park and Choi are serving prison terms of 22 years and 18 years, respectively.

For many South Koreans, the case is not just about Lee, but the whole chaebol system of family-run conglomerates which wield tremendous power and control economies in some South Asian countries.

President Moon Jae-in was elected in 2017 on a reformist platform and he promised to clean up corruption in high places. But the pandemic-related troubles have toned some of the rhetoric against these big businesses, which are needed to kickstart the economy and create jobs.

A petition signed by 57,440 members of the public has been submitted to the government hailing Samsung as “the pride of South Korea” and called for Lee to be set free and run the company that pays huge taxes to the government and creates jobs.