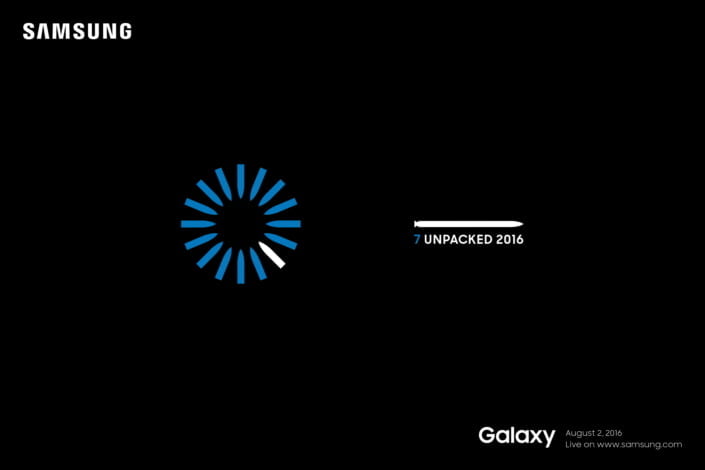 Surely, the release date doesn’t arrive as a surprise because we were all aware, according to the rumors, that the company is planning to launch its device sometime in August. But, the fact that Samsung finally decided to tease the details and confirm the news regarding the Note7 launch arrives as a relief.

Now it’s time when we start gearing ourselves for the Galaxy Note Unpacked 2016. Apple, the fiercest rival of Samsung in the smartphone economy, is also prepared to launch iPhone 7 series sometime in September. Though, Apple has not released any confirmations yet regarding the release dates or models either. The iOS giant is releasing three models in the 7 series, i.e. the iPhone 7, iPhone 7 Plus, and iPhone 7 Pro.

The fight is going to be great. Evan Blass, a popular Twitter personality known for reporting accurate rumors and leaks, predicts that following the Note7 release, the device will go on sale around August 15.

Galaxy Note7 features large screen size and stylus – S Pen. As described by the South Korean conglomerate, the device is a powerful instrument for self-expression and achievement. It is made for those who wish to gain the best from their smartphones and lives, as Samsung calls it. The company will allow individuals to achieve more at home, work and everywhere else in between.

Samsung has explained why it chose to call the new device as Note7 instead of Note 6. As Technowize had already predicted, the company chose to name the device as Note7 because it will complement with Samsung’s almighty releases, i.e. Samsung Galaxy S7 and Samsung Galaxy S7 Edge. Calling the device Note7 will eventually unify the product folio of Samsung Electronics. Also, using the term Note7 will simply minimize confusion about the brand new mobile technology from the smartphone powerhouse. It will offer a full alignment with Samsung’s Galaxy S models.

If the leaks and previews are anything to go by, the Galaxy Note7 will feature a curved edge 5.7 – inch display, TouchWiz interface will be replaced by Grace, the Note software will be overhauled, and the device may arrive equipped with pressure sensitive screen similar to Apple’s 3D Touch feature. Apart from this, the device is rumored to sport IRIS Scanner. Previously it was reported that Samsung Galaxy S4 would feature the technology, but apparently, the plan failed and now it seems Samsung is adamant on unveiling it with upcoming Note7 model. The device may not feature Android Nougat as it will be available a little after the release of Samsung Galaxy Note7. So it is believed that the smartphone will sport Android Marshmallow and the users will be able to upgrade the version when the latest version of Android N is released.

The Samsung Galaxy Unpacked 2016 event will celebrate the launch of Galaxy Note7. It will take place in New York at 11:00 a.m. EDT. On the same day, the launch events will also take place at 4:00 p.m. in London and Rio de Janeiro.

Galaxy Note 7 - An Irresistible Blend of Power and Perfection