The world’s largest chip maker has unveiled Samsung UFS memory card, which is the first of its kind in the industry. The memory cards are based on the Card Extension Standard* JEDEC Universal Flash Storage. 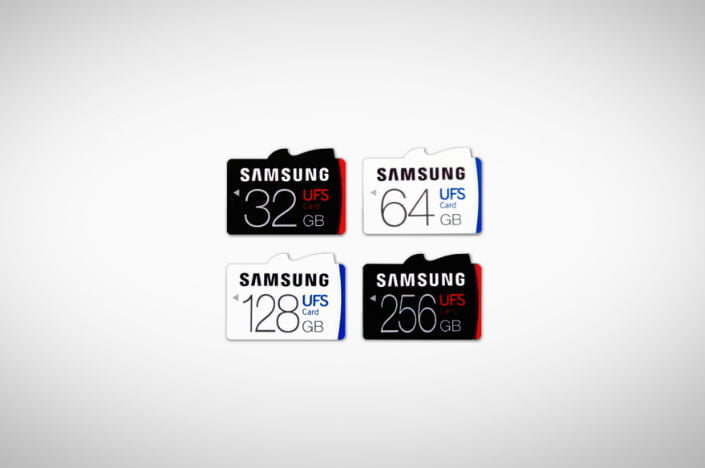 By launching a line-up of high-performance and high-capacity UFS card, Samsung is looking forward to transforming the growth paradigm of memory card’s market to prioritize user convenience and performance above everything.

UFS Memory Features – Everything You Need To Know

The 256GB removable memory card manufactured by Samsung will offer highly enhanced user experiences. It will be great for high-resolution movie playback and 3D gaming. It offers over five times faster performance than typical microSD card. It sequentially reads at 530 MB/s, which is similar to read speed of SATA SSDs. The latter is used widely at present.

With UFS memory card, clients can read a Full-HD movie having a file size of 5GB almost in 10 seconds. This is way faster as compared to UHS-1, which generally takes more than 50 seconds with a sequential reading speed of 95 MB/s. Also, at 40,000 IOPS random read rate, the card offers higher read performance by more than twenty times as compared to a basic microSD. The typical microSD offers 1,800 IOPS approximately.

When we’re talking about writing, the latest UFS card can process random 35,000 IOPS and attains sequential write speed of 170 MB/s. the random processing speed of UFS cards is 350 times more than the speed of a traditional microSD card with 100 IOPS. The speed of the latest removable cards nearly doubles the card speed of high-end microSD card. With such substantial enhancements in performance, the latest card manufactured by Samsung reduces the downloading time of multimedia data, loading time of photo thumbnail, and burst shooting mode’s buffer clearing time. This all can be highly beneficial to users of DSLR camera. In order to continuously shoot JPEG photographs, which are 24 large/extra fine equivalents to 1,120 MB, using a high-end DSLR camera, the card takes no more than 7 seconds. This is again higher than UHS-1 that usually takes 32 seconds at a rate of 35 MB/s.

In order to gain maximum performance and data transport that is power efficient, the UFS memory will support multiple commands with features that command queuing. It enables consistent writing and reading experience by using separate, dedicated path, which as a result, doubles the throughput.