Samsung’s new LPDDR5 is 16% faster than the 12 GB LPDDR5 that is available in the modern mobile platforms.

Samsung’s chip business is going strong, despite it lacking in the smartphone market. The gadget company is now preparing for the next year’s flagship product that will have 5G and more powerful specifications. For supporting those phones effectively, Samsung began mass production of what it terms as “industry’s first 16-gigabit (Gb) LPDDR5 mobile DRAM.”

The company is taking an interesting approach in its chip production process– it is using extreme ultraviolet (EUV) technology to create the chips. With the help of lasers and light-sensitive chemicals, the silicon is embedded onto the chip. This innovative technology helps Samsung to overcome a “major developmental hurdle” in scaling the RAM at the advanced stages. Samsung claimed that the chip offers the highest speed of working and the largest capacity ever available in a mobile DRAM. The new chip by Samsung is based on a third-generation 10nm-class (1z) process. The chip supports up to 6,400 megabits per second (Mb/s) power and is said to be 16% faster than the generally used 12 GB LPDDR5 RAM which can deliver almost 5,500 Mb/s speed. When the chip is packaged into a 16GB module, it can transfer up to 10 5GB-sized full-HD movies, or 51.2GB of data, in a single second.

In addition to giving faster speeds and efficient performance, Samsung also managed to achieve a breakthrough in the forming process of the chip. According to the company, it claims that the LPDDR5 package is about 30% slimmer in comparison to the predecessor and supports 5G and multi-camera setups. It also lets foldable phones pack more features with a slimmer build. The 16 GB LPDDR5 can build a 16GB package with only eight chips, which is significantly lesser than its predecessor that required 12 chips (eight 12Gb chips and four 8Gb chips) for delivering the same capacity.

“By delivering the first 1z-based 16 GB LPDDR5 package to global smartphone makers, Samsung company aims at further strengthening of its presence in the flagship mobile device market in 2021. The company is also planning to expand the use of its LPDDR5 offerings into automotive applications, which would offer an extended temperature range to meet strict and standard safety and reliability conditions in extreme environments,” stated Samsung. 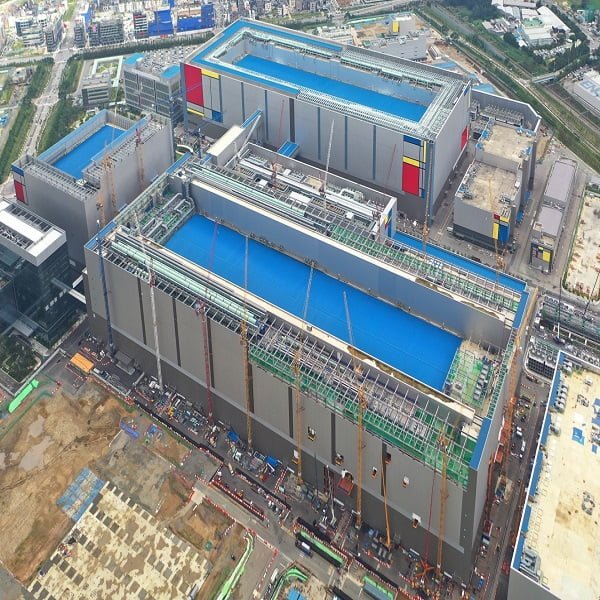 Apart from delivering a new chip, Samsung also announced the expansion of its manufacturing capacity at Pyeongtaek Complex. The Samsung Pyeongtaek Complex Line 2 is spread across 128,900 square meters (over 1.3 million square feet) and is said to be almost equal to the size of around 16 soccer fields. This is the third-largest semiconductor production line from Samsung so far.

“The new Pyeongtaek line will be a key manufacturing hub for the industry’s most advanced semiconductor technologies. It will deliver cutting-edge DRAM followed by next-generation V-NAND and foundry solutions while boosting the company’s leadership in the Industry 4.0 era,” Samsung stated.

Samsung a leading tech company  is a South Korean multinational corporation that has its headquarters in Samsung Town, Seoul. It consists of several affiliated businesses, out of which most are united under the Samsung brand. Samsung is the largest South Korean business organization.