The Science behind Organ Mimicry: Organ-On-Chip

Can translucent, microchips can mimic organs of humans? Yes, absolutely. In fact, such microchips can replace animal testing used for drug development. These flexible microchips which look like a flash drive, and provide a gateway to the mechanical motions, tissue structures, and functions of organs. These organs are namely lungs, intestines, hearts, and kidneys.

A Boston-based enterprise is aspiring to replicate the functions of the human body on a chip, better known as microchips. The aim isn’t to create humanoid robots, but rather develop a system, which could make the process of product and drug testing easier and better, and the concept of the animal testing obsolete. 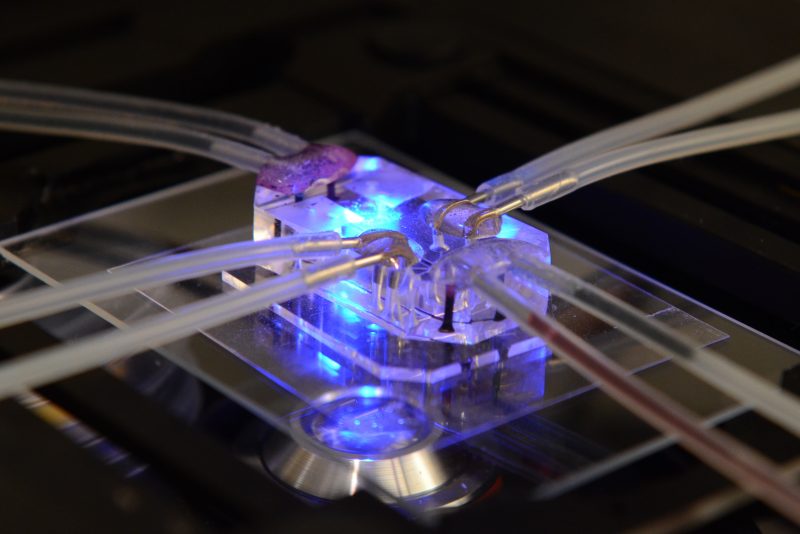 Merging modern tissue engineering with techniques of micro-fabrication, the organ-on-chip developed by Wyss Institute biologically mimics the biochemical and mechanical behaviors of organs such as the heart, intestines, kidney, liver, and lung. Organs like muscles, eyes, and skin are in the phase development. Multi-layered photolithography helps in the development of these pseudo-organs. It’s a fabrication technique from the makers of computer chips.

The procedure creates empty, microscope chambers, valve, and channels. These, however, are easy to mold on the inner side of layers made up of transparent polymers. Through these polymers, fluids such as blood can be easily pumped through. In addition to these, such devices, microfluidic to be precise, have porous membranes.

President and Chief Scientific Officer of Emulate, Geraldine Hamilton has his own thoughts when it comes to organ-on-chip structures. He believes it’s a beautiful blend of biology, design, and engineering. The engineering techniques are used to establish a dynamic system of living cells. Blood runs through these microchips in a similar manner to how blood flows through human organs.

The company aims to connect every organ-on-chip in the fluid in a similar manner to how the natural organs in human bodies are connected in order to establish an integrated system, which could be used without the requirement of engineering expertise. Once the system starts operating perfectly, it can easily test latest products in the cosmetic, food, and pharmaceutical industries.

The company has already collaborated with pharmaceutical giants like Merck Co. and Johnson & Johnson among other companies.

The company surfaced from MIT with a funding of US$3 million in Series A in 2008. In 2013, these companies sold their first “liver on a chip” product. It holds a license under HepatoPac. Additionally, the platform also supports dogs, monkeys, and rats apart of humans. The company offers HepatoMune for humans.

Hurel Corporation was founded in 2005. Merck funded the company from 2007 – 2011. The company has exclusive rights to specific patent applications and patents which Cornell University owns. Hurel Corporation’s liver on chip supports four specimens, i.e. primate, human, rat, and dog. In addition, these are available to various laboratory locations throughout the Western Europe and the United States.

However, at present, there are only limited options available to test chemical, food, or some drug. A human-relevant system is quite necessary to provide complete accurate results on such tests. The technology of organs-on-chips fulfills that necessity.