A definite behavior of the “fourth fundamental state of matter,” known as plasma has eluded scientists since first discovered in the 1920s by chemist Irving Langmuir. And as a major constituent of nuclear fusion, this lack of knowledge has ridiculed efforts to generate energy through a safer, clean and efficient means of nuclear reaction – atoms binding. Studying it in our labs has always been like trying to see an electron. But there’s a new lead.

A group of researchers from Ireland and France has announced studying the behavior of plasma using large radio telescopes and ultraviolet cameras on a NASA spacecraft. Findings of the study, led by Dr. Eoin Carley, a postdoctoral researcher at Trinity College Dublin and the Dublin Institute of Advanced Studies (DIAS), have been published in the Nature Communications journal.

Plasma – a highly unstable and electrically charged fluid – is the most common state of matter in the Universe, though most of the matter we interact with in our everyday lives is in the form of solid, liquid or gas. In a conventional arrangement, visible matter exist as solid, liquid, plasma or gas. Plasma is fire and behaves more like a gas, except that it’s affected by magnetic fields since it’s electrically charged. The Sun is composed of plasma, neon and fluorescent lights contain plasma.

The Sun is an all-natural laboratory to study plasma

Despite being the most common fundamental state of matter in the Universe, plasma remains a mystery. This is mainly because it’s naturally scarce on Earth. Recreating the extreme conditions, which is difficult to tame, in special laboratories on Earth have been the only source of studying plasma. But the Sun is an all-natural laboratory to study the behavior of plasma in varying conditions quite difficult to create artificially in Earth-based laboratories. 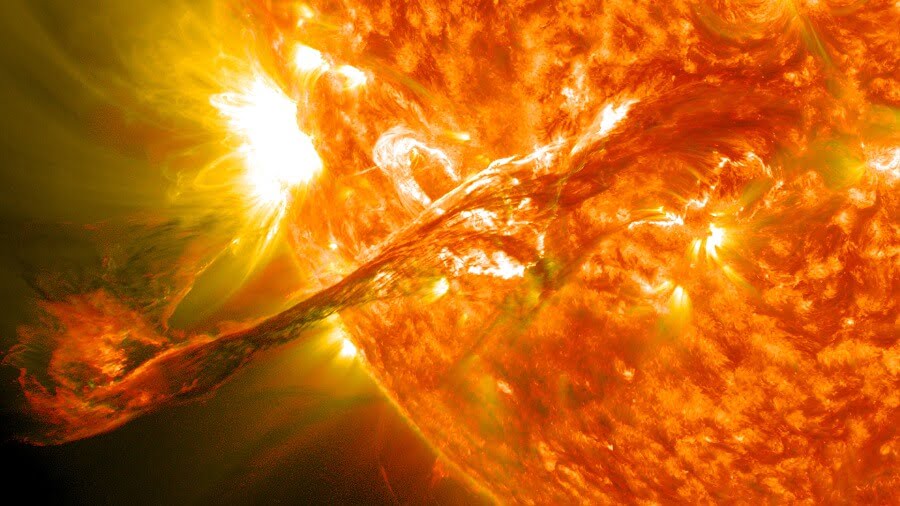 Generating fusion energy involves tightly containing extremely hot and pressurized plasma in a reactor, which remains a very difficult task without understanding how plasma behaves. Scientists believe that studying how plasmas become unstable on the Sun could provide answers.

“The solar atmosphere is a hotbed of extreme activity, with plasma temperatures in excess of 1 million degrees Celsius and particles that travel close to light-speed,” said Dr. Carley. “The light-speed particles shine bright at radio wavelengths, so we’re able to monitor exactly how plasmas behave with large radio telescopes.”

To show that plasma on the sun can often emit radio light that pulses like a light-house, the researchers combined radio observations generated at the Paris Observatory in Nançay, France with ultraviolet cameras on NASA’s space-based Solar Dynamics Observatory spacecraft, Carley said.

“We have known about this activity for decades, but our use of space and ground-based equipment allowed us to image the radio pulses for the first time and see exactly how plasmas become unstable in the solar atmosphere.”

Controlling plasma instability is the key

Nuclear fusion is a means of generating nuclear energy by fusing plasma atoms together, not breaking them – fission – commonly used today. “Fusion is more stable and safer, and it doesn’t require highly radioactive fuel; in fact, much of the waste material from fusion is inert helium,” said Peter Gallagher, a collaborator on the project who is a profession at DIAS. “The only problem is that nuclear fusion plasmas are highly unstable.”

Generating fusion energy involves tightly containing extremely hot and pressurized plasma in a reactor, which is a very difficult task with no definite knowledge of plasma behavior at varying conditions. In Earth-based laboratories, some natural processes usually switch-off nuclear fusion reaction as soon as the plasma starts generating energy, explained Professor Gallagher. The switch-off behavior is like an inherent safety switch, which explains that “the plasma is difficult to maintain in a stable state for energy generation.”

We can learn about how to control plasmas on Earth by studying how they become unstable on the Sun, Gallagher added.