The autonomous truck startup Otto has merely arrived out of covert-mode. The team of self driving truck startup includes Anthony Levandowski (team member in Google’s first autonomous car project) and Lior Ron (prominent personality at Google Maps). They are accompanied by members from Here Maps, Apple, and Tesla, too. 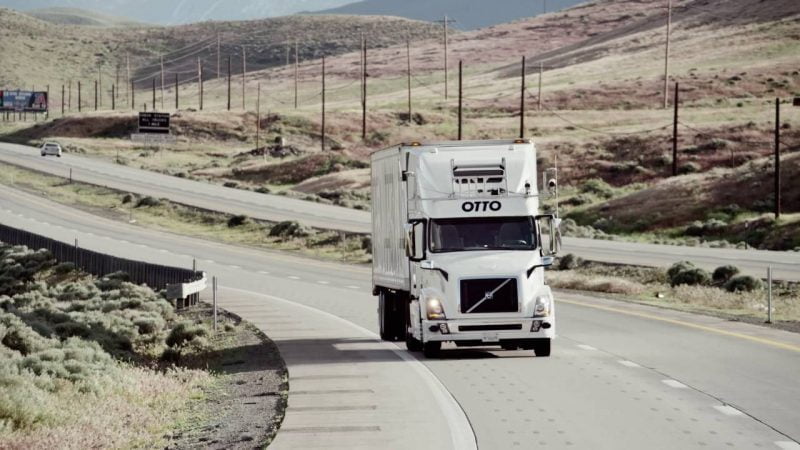 Otto aims to solve the complex and necessary challenges in self-driving concept first by introducing the autonomous tech to highways and making the system of trucks completely autonomous. The technology in this self driving truck startup is comprised of software, hardware, and sensors. These can be easily implanted onto current systems to provide full autonomy. In such technology, driver acts more like as supervisor.

This is Otto’s first application. Generally, we’ve noticed that semitrailers are the one who spend most of their work hours on highways. And highway driving is, so far, the simplest sort of automation driving. This is because the traffic hassles and presence of public is less on highways as compared to jam-packed roads in the city. The idea of self driving trucks has enticed industrial giants so much that Daimler and Tesla have already started looking out for ways to introduce self driving automation in truck driving.

The family of self driving trucks, perhaps, has more chance to transform into a commercial reality than cars. This is because they only have to stick to straight highways rather than complex streets. The startup has implanted three new big rigs from Volvo with a variety of sensors that include a plain-old camera, radar, and lidar. The self driving trucks have already been tested on the Nevada roads without the presence of driver behind the seat.

During the release, the startup claimed that the autonomous kit, which is under development, has been designed to fit in the latest truck models, not the old ones. They are also claiming the trucks to be affordable.

Surprisingly, Otto is not the only one concentrating on evading this niche. Media loves to concentrate only on autonomous cars, but there are companies who’re focusing on self driving trucks such as, Daimler and Peloton.

Recently, a convoy of autonomous trucks was spotted at the Port of Rotterdam. No segment of technology can drive away more job or economic efficiency, as much as an autonomous truck can.

Shipping a fully packed truckload from Los Angeles to New York generally costs approximately $4,500. 75 percent out of this charge is represented by labor cost. Having self driving trucks are one of the most efficient methods in saving labor costs.

As per the law, drivers are strictly advised to only drive for 11 hours every day. This includes without taking an 8-hour long break. On the contrary, an autonomous truck is free to work 24 hours per day. This means that the U.S transportation’s output can be effectively doubled by the use of technology at only 25 percent of the total cost, which is required at present.

Additionally, once the autonomous technology grows mature enough so that it can be used commercially, individuals can enjoy safety benefits considerably well. As per the records, most traffic accidents involve trucks. This issue can be dragged under control with the introduction of autonomous trucks.