Since the advent of the smartphone, life has become much easier for the humans as a wide range of facilities is available at just a fingertip. The smartphone is such an efficient device that it is full of features equivalent to a proper desktop computer. Due to the unending technological possibilities it offers, a majority of humans bound to get addicted to it. According to recent studies, 40% of the world’s population is addicted to smartphones. A normal human being checks his phone at least 9 times in an hour. This causes a lot of distraction when one is doing something productive like studying or working. Distraction due to smartphones has caused 3,328 deaths in the U.S. in 2012. The Siempo anti-smartphone aims to curb such problems caused by distraction.

The young startup Siempo believes that modern technology has too much control over human lives. The California-based company decided to come up with a gadget which helps an individual to live in the moment instead of living in the virtual world. It has come up an anti-smartphone which has all the features a normal smartphone has, but these features are not easily accessible. This device presents essential information according to the needs of its user to avoid any kind of instinctual curiosity. It launched its crowdfunding campaign on Kickstarter on Tuesday. It is available at an early bird price of $280, but later on, the retail price will be $349. The shipping is expected to begin in December 2017. 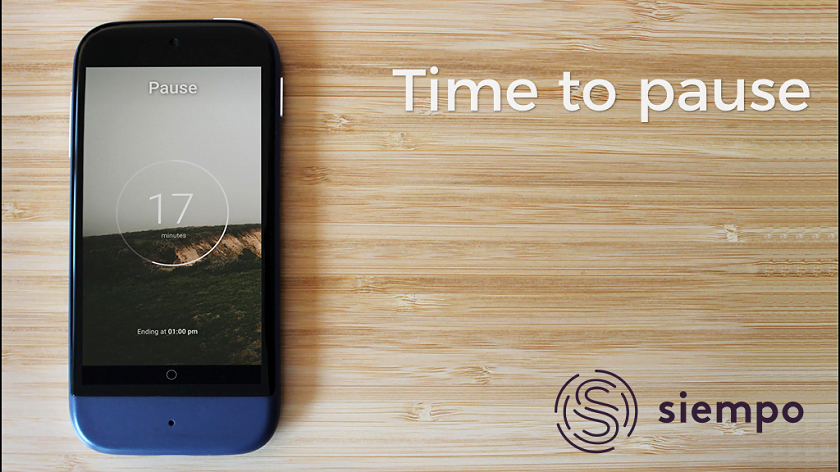 This smartphone helps to reduce distraction due to its minimalistic features.

Termed as the Siempo anti-smartphone, it has features which are at par with any ordinary pocket-friendly smartphone. It is a minimalistic phone which offers features which are necessary for a person’s everyday lives. It comes with a 1GHz quad-core processor, 8GB of internal storage, a camera, a 4-inch high-resolution screen with a Gorilla Glass, a fast-charging 1,600mAh battery, and an Android-based operating system. The highlight of the smartphone is the ‘Pause’ button which is a physical key present on its side. This key temporarily disables any incoming notifications and previews the functions which are selected by the user beforehand.

The Siempo anti-smartphone lacks a home screen. Instead, it has an “Intention Field” which is a blank white box that guesses the requirement of the user. One can use the map and the camera features but it restrains the use of the web browser and internet apps. It lacks the Google app store which means that one can’t download any app he wishes to. He can only use the apps provided to him by the phone. The use of such a minimalistic phone might help reduce the increasing addiction and distraction caused by smartphones.