The Soft-Bodied Robotic Octopus that could Revolutionize Deep-Sea Exploration

I have always been fascinated by nature-inspired inventions in the field of robotics. This has grown even since Boston Dynamics (now a part of Google’s moonshot lab) released a video of the world’s fastest land robot, a four-legged machine based on a cheetah. Notably, substantial inventions have been made in this field. The craziest of nature-inspired robotic inventions include robotic bacteria and a softbot inspired by a sea creature called the moon jelly. What we understand is that we need flexible robots which can navigate the ocean floor or perhaps, the surface of Mars. These robots should be able to move through rough terrain without any glitches, whether external or internal. Moreover, these soft, flexible robots will need manipulators, so they are able to grab strangely shaped objects. We have made notable progress in the last two years in the field of soft robots. To name one, we have miniature soft robots which can even serve as surgical tools for medical surgeries, and now a robotic octopus. 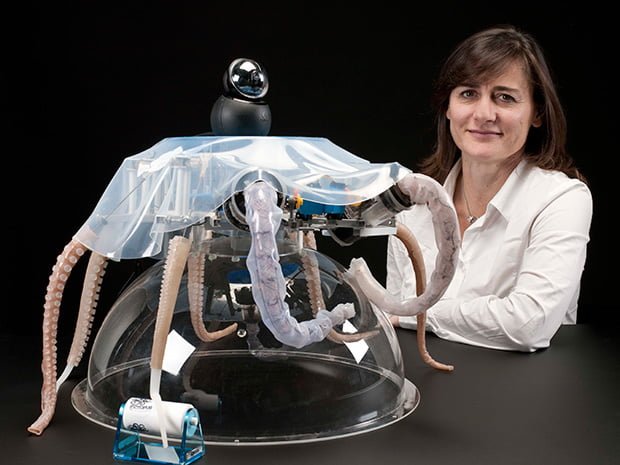 A team of researchers at the BioRobotics Institute at Scuola Superiore Sant’Anna in Pisa, Italy has built a replica of an Octopus – a soft-bodied robotic octopus. The prototype is a major step in bio-inspired robotics (biomimicry) and will soon be tested in the Mediterranean. The test is to measure if it can draw in liquid and expel it, thus moving forwards, or use its eight arms to crawl over space. It will also check how it is able to bend in all directions, gripping objects, etc.

Professor Cecilia Laschi, recently wrote in the IEEE Spectrum that multiple techniques were used for making the fake muscles to build the eight arms. The various options include electro-active polymers that twist when exposed to a granular substance, and then expelling the air to tense specific areas. The researchers were mostly interested in shape-memory alloys, i.e. metals which can change back to a defined shape when heated. Although, they had to switch to using cables wrapped in silicone rubber in the end.

The field of soft robotics is still in its infancy. The robotic octopus can move through water, but it’s not in fact as graceful as an actual octopus. In fact, the tentacle movements made by the robot octopus are found to be quite rigid and difficult to maintain and in some cases, even dangerous.

In the quest for interstellar travel and deep ocean exploration, researchers are increasingly taking lessons from nature, i.e. relying on biomimicry to create the replica of an animal. A lot of studies have been done recently over their bodies, pliable joints, and tissue, so we are able to replicate them. Animals have soft tissues which can absorb shocks and adapt to varied surfaces without any damage. By using embodied intelligence, we’ll one day be able to replicate hundreds of sea creatures around us which can grasp, crawl, and even swim with very little computing power needed.