Soft robotics is quite the growing field with increasing scrutiny from the robot community as well as the public media.  Soft Robotics is the particular subfield of robotics dealing with building robots from exceedingly compliant materials, similar to those found in living beings. The idea behind this specific area of robotics is to increase flexibility and adaptableness for accomplishing tasks as well as improved safety while working around humans. Such features of soft robotics would potentially be applicable in fields of medicine and manufacturing drawing heavily from human being’s way of moving and adapting to surroundings. 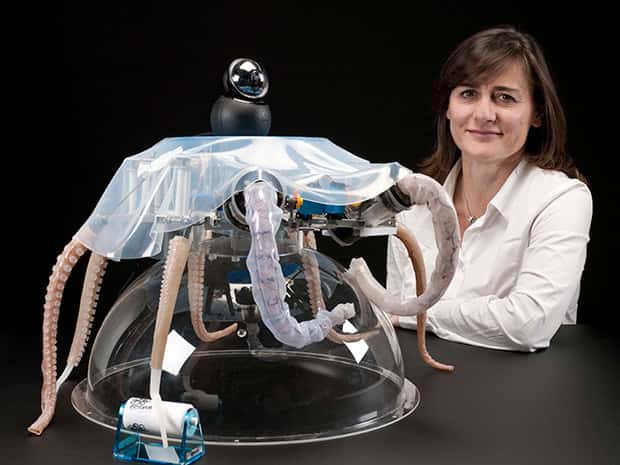 Soft robotics relies on taking off mobility mechanisms of soft bodies existing in nature to attain smooth and complex motion. The composition of these robots primarily comprises of easily deformable matter such as gels, fluids and elastomers that can be equivalent to certain materials. This process of matching such matter is known as compliance matching.

Compliance matching is the theory that materials which come into contact with the other ones should share similar mechanical rigidity so that the internal load is evenly distributed and interfacial stress concentrations are diminished. However, this principle does not work on rigid robots interacting with soft materials inflicting damage or mechanical immobilization.

These efforts to begin creating new robots that would be totally different from their conventional rigid counterparts really commenced far before the manifestation of the professional terminology. McKibben, in the 1950s, had reportedly developed braided pneumatic actuators for an orthotic appliance for polio patients. This artificial muscle by McKibben was thereafter widely investigated and also employed in different types of robot design.

Nevertheless, even after numerous developments over so many years, the igniting topic of soft robots has grown increasingly only in these recent decades. This gradual recognition by the robotic community is mirrored by the rapidly increasing number of laboratories, international collaborations, soft robot-related societies and organizations, emerging publications, professional events and activities, and special session in all kinds of international conferences. Even though the soft robotics field is still in its formative years, a number of review articles have been presented to sum up the achievements, examine the techniques, and discuss the challenges and possibilities for the future.

WHAT ARE THE CONSTITUENTS OF SOFT ROBOTICS?

The objective of soft robotics is the design and production of robots with physically flexible-bodies and electronics. This softness can sometimes be limited to part of the machine. For instance, rigid-bodied robotic arms can make use of soft end effectors to gently grab and manipulate delicate or irregularly shaped objects. However, the field of soft robotics generally inclines toward machines that are largely or exclusively soft. Robots with entirely soft bodies are believed to have incredible potential. Their flexibility, for one, facilitates them to compress into places where rigid bodies generally cannot. This feature could prove of use in disaster relief scenarios. Secondly, Soft robots are also considered safer for human interaction and for internal use inside a human body.

For soft robotics, nature has often been a resource of inspiration design primarily because animals themselves are typically composed of soft components. They also come out to make the most of their softness for efficient movements in complex environments almost anywhere around the globe. As a result, soft robots are frequently designed to seem like familiar creatures, especially entirely soft organisms like octopuses.

However, it is extremely tricky to manually design and manage soft robots given their low mechanical impedance. The most important factor that makes soft robots valuable, i.e. their flexibility and compliance in turn makes them difficult to control. The mathematics that has been developing over the past centuries used in designing rigid bodies usually fails to extend to soft robots. Hence, soft robots are commonly designed in particular parts with the help of automated design tools, such as evolutionary algorithms, which make possible a soft robot’s shape, material properties, and controller to all be simultaneously and automatically designed and optimized together for a given task.

APPLICATIONS OF A SOFT ROBOT

Since these Soft Robots are composed of materials that match the compliance of biological matter (such as human skin and tissue), they are major assets and mechanically biocompatible and capable of lifelike functionalities. In addition, soft robots are made of materials that can change their shape and elastic rigidity, which are also lightweight, but again are adaptable to intimate human contact. These can therefore be imagined to be comfortable, soft enough to prevent injuries, biocompatible and compliant. These features are believed to potentially lead to plethora of promising new technologies in a broad range of social, scientific, and industrial activities in the future.

Some of these application examples are large size robots, i.e. soft wearable robots, soft prosthetics; miniature robots that could be used for field explorations, drug delivery, minimally invasive surgery, and medical implants, etc. The field of human motor assistance, using soft wearable robots, could be the first that will be successfully implemented. This new type of robots allows to assist patients with muscle weakness or patients who suffer from physical or neurological disorders (for example, stroke or traumatic brain injury) for fine motor tasks like moving or grasping.

Again, the application of soft active ankle foot orthotic (AFO) could also possibly help prevent foot dragging for patients that suffer gait abnormalities such as drop foot. An implementation that has been reportedly made is with the soft hand orthotics that contains artificial muscles to supply assistive mechanical aid in the fingers and wrist. These types of Soft robots will also have a very significant role to play as field robots for search operations. This could be whether in case of natural disaster relief, for the transportation of various hazardous materials, for military inspection or for data collection, and are expected to prove to be very superior assets for the future of technological assets.

As of now, from what we have come to understand is that Soft robotics offers an exceptional solution for any kind of application that involves intimate human contact. The versatility observed in nature is also present. Although in their early stages, soft robots are believed to have a multitude of uses in numerous applications in the following years to arrive.

The Soft-Bodied Robotic Octopus that could Revolutionize Deep-Sea Exploration