Unlock the ultimate immersive AV experience with a price-tag that doesn’t burn your pocket.

Of late, not only tech savvy people but users in general, especially the ones who love to watch football, are hitting their keyboards in excitement and they all type ‘Sony Bravia X75K Review’. The football fever is high all over the world as we approach the finals of the ongoing FIFA World Cup 2022 in Qatar. With the final slated to take place within days, the mad rush for buying new TV sets has taken the center stage.

This is nothing new. During every football World Cup, we witness a massive surge in the sales of TV sets, across the globe. We experience similar trends during other important sporting events too; like the MLS (Major League Soccer) final, US Open, PGA Championship finals and the Olympic games.

This year, the phenomenon is in great shape as TV sets are almost flying away from the stores and that too at a skyrocketing speed. However, Sony is leading the charge and the new Sony Bravia X75K is outsmarting others by more than fine margins. Let’s delve deeper with this and analyze the factors which are allowing Sony to have an edge over its close competitors, thanks to this gem of a television set. 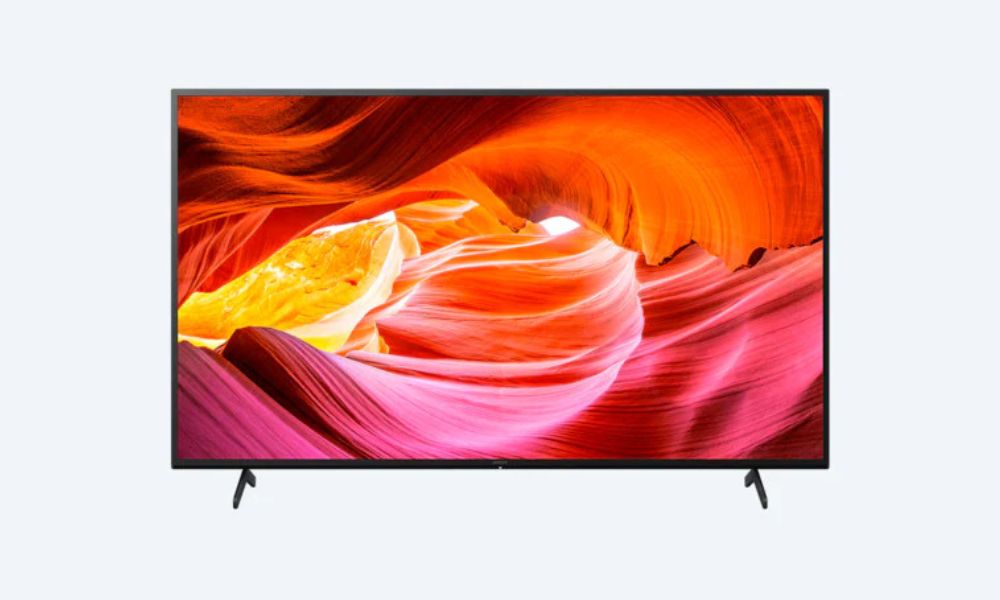 Sony claims that you can enjoy ‘4K pictures, rich with real world detail and texture’, all thanks to its over the top 4K Processor X1, which ensures a monstrous performance. [Image Credit: SONY]

Sony’s Bravia series has made a name for itself over the years and the X75K happens to be a great example of that impeccable legacy. Let’s have a close look at the stunning Sony Bravia X75K features, which sets it apart from the sea of TVs available in the market.

The visual offerings of the Sony Bravia X75K, seems almost unparalleled at this price range, keeping other important aspects in mind. With a resolution of 4K Ultra HD (3840 x 2160), it can even give some high-end models a serious run for money.

Sony claims that you can enjoy ‘4K pictures, rich with real world detail and texture’, all thanks to its over the top 4K Processor X1, which ensures a monstrous performance. You would be amazed to know that even images, which are filmed in 2K and HD are upscaled close to 4K levels of detail through 4K X-Reality PRO courtesy of a unique 4K database.

In addition to these, the Sony Bravia X75K comes with an enviable refresh rate of 60 Hertz, accompanied by a 178 Degree wide viewing angle.

Pleasure to the Ears

This smart TV set boasts of Clear Phase technology, which analyzes physical speaker response and tallies it with the original audio signal, through a host of frequencies. This information is applied to negate any sort of peaks or dips in the speaker’s natural response to ensure pure, natural audio with smooth, even recreation of every frequency.

Moreover, there’s 20 Watts Output along with Open Baffle Speaker and Dolby Audio. Therefore, you can do away with a soundbar and can solely rely on the TV set’s in-built speakers.

Thanks to the presence of as many as 3 HDMI ports, you can seamlessly connect to an array of important stuff like set top box, Blu Ray players and gaming consoles. Alongside all these, there are 2 USB ports, which will allow you to connect with hard drives and other USB devices.

The Sony Bravia X75K comprises the all-new, enhanced X-Protection PRO technology, which ensures that the device lasts longer than ever. Bolstered with world-class dust and humidity protection, it has successfully gone through the highest standards of Sony’s lightning tests. Hence, your TV is absolutely full-proof from lightning strikes and power surges.

These days, many smart TVs come with their own OS, something which often turns out to be a hindrance to your desired seamless user experience. In the case of the Sony Bravia X75K, you will get the Android ecosystem. Thus, you can enjoy everything without any hassle. In a way, it seems like operating your smartphone with a cool remote.

Shall I Buy It?

In a nutshell, the Sony Bravia X75K is a great choice, if you are planning to buy a new smart TV before the FIFA World Cup 2022 final or this festive season. Though there are some reported incidents of color distortions like blue, green and red losing their true self at times, the overall feedback is extremely positive.

Moreover, the Sony Bravia X75K price (the 65-inch variant costs you $700) more than justifies its price-tag. It perfectly qualifies as a decent value for money option. It also comes with a one-year warranty alongside some added perks like free installation and easy return policy.

At present, the smart TV industry is largely dominated by LG and Sony. Though there are other players like Samsung, Mi and OnePlus, which has set the smartwatch market ablaze lately with the OnePlus Nord Watch. The equation is almost the same, all across the world. For, both LG and Sony stand class apart from others thanks to their own top-notch LED panels, something which is a very central feature to a smart TV’s astounding success.

We must mention one thing in this review that despite LG flaunting its OLED technology and claiming it delivers the best visuals, SONY takes the pole position when it comes to the overall performance. Firstly, watching TV is not only about consuming visuals. It’s just one important part. SONY edges past LG and others by miles in terms of delivering over the top sound. You must take note that a good (forget great) soundbar costs you a lot and the SONY TVs wipe out that added expense. It’s indeed a great add-on.

The way things are unfolding in recent times, especially, after the impressive run of the Sony Bravia X75K, SONY can burst the bubble of LG’s ‘unchallenged supremacy’ in the domain of smart TVs, very soon.

Meanwhile, you can also have a look at our Amazon Fire TV Omni review, which remains another great option among the smart TVs available in the market, at the moment.

How much does the 65-inch Sony Bravia X75K cost?

Where can I buy the Sony Bravia X75K?

You can buy the Sony Bravia X75K directly from Sony’s website or from leading e-commerce sites like Amazon and Best Buy.