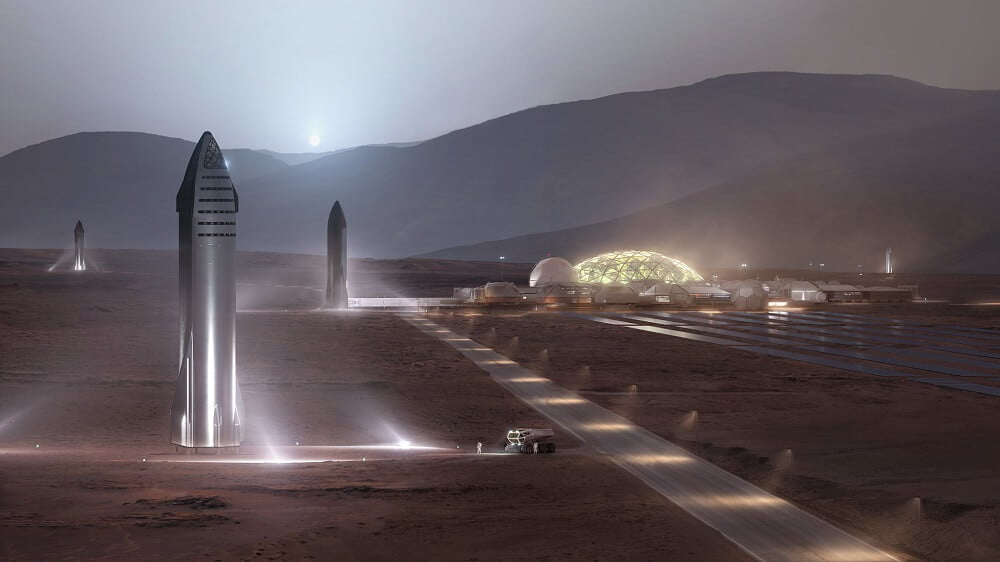 In a series of Tweets recently, Elon Musk said that SpaceX plans to ferry 100k people to Mars by 2050 on its Starship and Super Heavy Rocket system, which is designed to service all Earth orbit needs as well as the Moon and Mars. He tweeted that a 100 Starships were needed a year to send about a 100k people to Mars whenever the two planets’ orbits are aligned.

This happens every 26 months when the distance between the Earth and Mars decreases. Musk’s ambition is to send a 1000 Starships into orbit during this short window of about a month, and transport people to Mars taking advantage of the decreased commuting time. Travellers would still be looking at months of travel aboard the Starship transporter before reaching their destination. When questioned on the validity of the numbers by a follower, Elon Musk agreed that the Starship could be carrying about a million people to Mars from Earth by 2050. Musk further elaborated on the mechanics of this ambitious plan. He tweeted that a crazy amount of cargo capacity will be needed to build a human colony on the Red Planet.

“Megatons per year to orbit are needed for life to become multiplanetary,” he tweeted. For a yield of one megaton per year, each Starship needs to deliver 100 tons per flight, according to Musk.

SpaceX says that the Starship and the Super Heavy rocket have a 9 m payload compartment, which is larger than any such payload available at present, or soon. This will enable it to deliver satellites to Earth’s orbit and beyond, at a lower marginal cost per launch than the current Falcon vehicles. Starship’s pressurized forward payload volume is greater than 1,000m3, enhancing utilization capacity for in-space activities. The aft cargo containers can also host a variety of payloads, according to a statement on the company’s website

He added that there will be a lot of jobs on Mars once the colony is established. The Starship transportation system is still in the design stage. The Starship transportation system is a two-stage vehicle made up of the Super Heavy Rocket, the booster, and the transport pod–the Starship. SpaceX intends to ultimately replace its Falcon 9 rocket systems by creating a single reusable transportation unit to service its interplanetary commuting ambitions. The space company intends to redirect resources from Falcon 9 series to the Starship, to help make it an affordable option for people wanting to travel to the moon and more.

The first cargo mission to Mars is planned in 2022. This initial mission will establish the possibility of life on Mars, look for water sources, and establish a small infrastructure.

Another mission in 2024 is planned with cargo and crew both. They are hopeful of setting up a more secure base on Mars to facilitate future missions and the beginnings of colonization of Mars.

SpaceX has already announced its plans to carry fashion innovator and art curator Yusaku Maezawa to fly around the Moon in 2023. Only 24 other people have made it to the Moon to date, the last one being in 1972.

SpaceX will be conducting the first private flight to the Moon, it will be a fly-by of the moon on a weeklong trip.