As promised last week, SpaceX on Monday revealed the identity of the first private passenger traveling to the moon. For its 2023 lunar mission, the company has signed Yusaku Maezawa, a fashion innovator and Japanese billionaire who founded Japan’s largest fashion e-retailing site, Zozotown.

Maezawa will be the first private tourist to board the Big Falcon Rocket (BFR) launching in 2023. He is a 42-year-old tycoon with a personal net worth of $3 billion and is currently the 18th richest man on the planet, according to Forbes business and Tech magazine.

Meanwhile, during the press conference at the headquarters of SpaceX on September 17, 2018, CEO Elon Musk said to the in-house audience that he reckons humanity “to become a multi-planet civilization as soon as possible”. He further added that he anticipates to “make people excited about the future.”

Lasting about a week, the journey will come as close as 125 miles to the Moon’s surface before completing lunar transit and returning back to Earth. pic.twitter.com/1P4HSHxaNU

Maezawa will be joined by 6-8 artists or cultural figures chosen from across the globe on the SpaceX lunar mission. These artists could be anyone representing creative fields such as musician, painter, writer, movie director and many more.

“Ever since I was a kid, I have loved the moon,” Maezawa spoke. “Just staring at the moon fueled my imagination; it’s always there and has continued to inspire humanity. That is why I do not pass up this opportunity to see the moon up close.”

The idea behind traveling with artists on the 5-day space voyage is that the Japanese billionaire actually wants them to express their breathtaking experiences in creative forms. He believes these masterpieces would ultimately inspire the dreamers within everyone on the Earth.

Maezawa has already paid an undisclosed but hefty amount to book his space for the flight to the moon. He, in fact, announced to sponsor the entire trip for all the creators who will join him for the trip around the moon.

Following this, Maezawa turned this entire Moon mission into an art project titled, #dearMoon, for which he also launched a video clip in the midst of the event.


Elon Musk and His Space Mission

At the event, Must took the opportunity to reveal the new specifications of the BFR spaceship. There is a Big Falcon Ship mounted on the top of the 118 meters long BFR which can carry 100 people altogether along with 110 cubic meters of freight. The BFR will be set for the test flight by the next year. 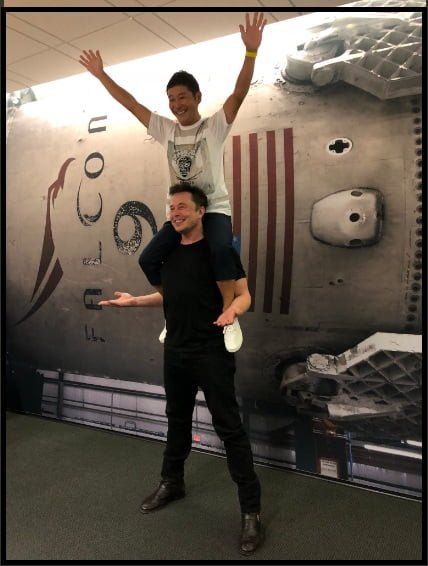 Maezawa will be the first private tourist to board the Big Falcon Rocket (BFR) launching in 2023. Source: Elon Musk via Twitter

This is not the first time that Elon Musk’s space venture has announced to fly humans into space. Last year in February, it had announced to employ its Falcon Heavy rocket to carry crew to and from the space, which was slated to launch by the end of this year. However, SpaceX scrapped the idea later on.

At the launch of Falcon Heavy in February this year, Musk informed that the company has decided to use BFR for its 2023 lunar mission.

Project delays and setbacks are not new to Elon Musk and his companies. At the end, the team has always been able to pull off the most challenging tasks and create milestones such as Tesla’s production department.