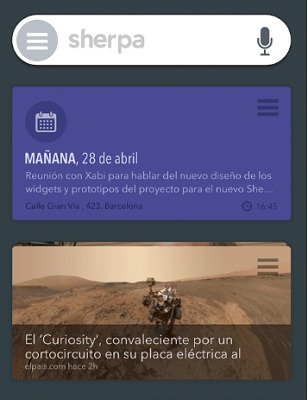 So you may not know this Spanish AI assistant Sherpa, but the least you could do is say hello. Xabi Uribe- Etxebarria, the founder, and CEO, introduced the second generation of the digital assistant back in March 2013. Despite being into beta version, Sherpa 2.0 managed to receive a positive nod from the tech jargons.

The app has been a huge hit in Latin America and Spain since its launch and in April 2013, it was officially introduced in the US, albeit for a beta version. Sherpa Beta is already available for free on Google Play.

Similar to Google Voice Search and Siri, Sherpa provides a voice-controlled interface for performing common tasks and conducting web searches on smartphones. It uses Speech Recognition API of Android to comprehend you commands and respond using text, voice, or both the mediums.

We have witnessed a sudden rise in bots and apps. Viv from the creators of Siri, Tay from Microsoft, Google Allo and Google Duo from the house of Google, Microsoft Cortana, and Facebook M among many others are the popular ones. Besides machine learning and artificial intelligence, these assistants have something in common; they are for users who speak English. It’s a great fact that Spanish AI assistant Sherpa, primarily written for Spanish speakers, is now fit to announce funding. Series A round for Sherpa witnessed funding of $6.5M. This is quite good considering the roots of the app lies in Spain. For non-Silicon Valley startup AI assistants the tech world is too harsh to survive, as they have to compete with dominating biggies like Google, Apple, Microsoft, and Facebook.

This funding according to the makers of Sherpa will be used to build and introduce more functionality. The fund will also concentrate on hiring more team members and expand the app’s reach so that it can make up to Series B, and offer languages like English.

The AI is growing bigger and better with every passing day. Take Google Voice Search for an example. It used to be a handy AI assistant by the company, but broadening its horizon the search engine giant recently introduced Allo and Duo. Everything with AI assistants is good except the fact it only focuses on the market of English speakers. Due to this, a large amount of non-English speaking users remains unaware of such evolution going on. This is why the app like Sherpa has originated.

Also Read: No Matter How Intelligent AI Chatbots Are, They’ll Always Be a Waste of Time

“Google Now, for instance, has Spanish but in a limited version, and I’ve always said Siri is not competitive with what we are trying to do,” Xabi Uribe- Etxebarria said. “We are trying to provide services like news, movie and TV show listings, and sports results that users might like and based on their preferences. We want to know the weather and tell you what to wear.”

The first round investors include a few private investors along with Alma Mundi Innvierte Fund and FCRE.

Read Technowize for more news related to Technology, IT Updates, and Latest Gadgets.