Let’s take a look at Spike Jonze’s 21st century love story Her, a utopian pastoral about a poetically melancholic man smitten with an empathetic operating system, considering you’ve seen it already. As the film opens, we first find our hero, Theodore Twombly (played by Joaquin Phoenix), a former LA Weekly writer who now (ironically) works for a firm called BeautifulHandwrittenLetters. Tingling with loneliness, Theodore pours his romantic self, drifting from a depressive haze, into these letters he has been commissioned to write. Recently divorced, Theodore is unaffected by material comfort and rather the neo-classic isolation, that is until Samantha enters his life by chance.

Heralded as the world’s first A.I. operating system (aka OS1), Samantha is anything but ordinary. Warm, witty and sensual, she is empowered to organize his life, playing the role of a perfect woman, in a motherly and nurturing way and requiring nothing in return (ironic, huh?). Soon beings a courtship that is inevitably doomed from the start. 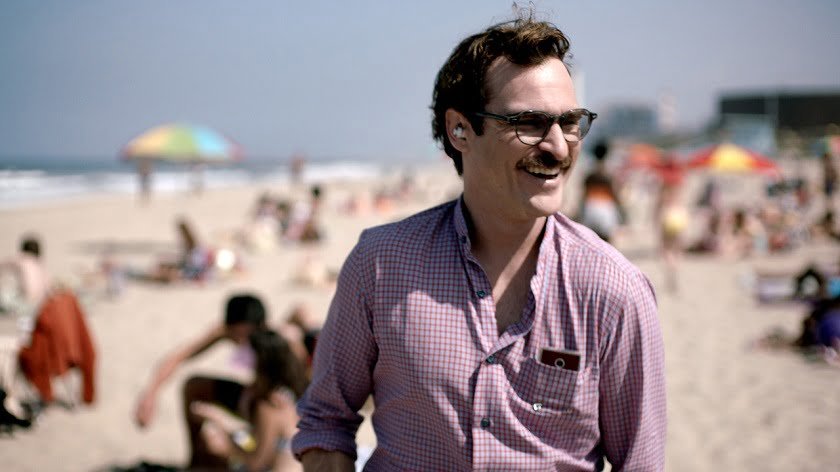 The 2013 American romantic science-fiction drama film Her is a subtly profound work of art exploring our relationship to technology, taking notes from Siri, the voice of Apple’s iPhone.

As the relationship grows, Samantha begins to longs for a physical dimension, and soon burrows deep into the eternal dilemma known to mankind: the struggle to know one’s true self. She is just as real to Theodore as anyone else outside the digital world. To the outside world, she’s just an operating system, who can operate simultaneously in many places at once. Lo and behold, she isn’t bound by a sense of monogamy – she is the operating system for 8,316 computer-users, and has fallen in love with 641 of them.

It’s a perfect tale, and not just because it takes cues from the classic, boy-meets-girl (boy-meets-operating system, in this case). Samantha frets about profound existential quandaries, after discovering that she is a conscious entity in someone else’s world.

Her is a subtly profound work of art exploring our relationship to technology, taking notes from Siri, the voice of Apple’s iPhone. Considering how A.I may gain and even develop superior sentience, it raises the question whether the essence of being human can be boiled down to a simple algorithm?

Whether in flesh or in binary, the spiritual journey of A.I. quantum upgrade has begun. And it sprinted at the first gun shot when we called Apple’s Siri, binary entity with ‘she’ instead of ‘it’. It began with a simple assignment of gender, which is in fact, the most essential of social category.  Microsoft’s Cortana, Amazon’s Alexa, Apple’s Siri, all have the prerequisites for social gender assignment, and this is exactly why we call them ‘she’. In some cybernetic dystopia, this could be the first step towards A.I. quantum upgrade.