Facebook CEO Mark Zuckerberg celebrated 500M Instagram users on Tuesday. He posted a cute picture of himself overwhelmed with his subsidiary’s huge achievement. In the picture, he was seen enjoying the ‘500M Instagram users’ moment featured the CEO posing inside the Instagram frame. 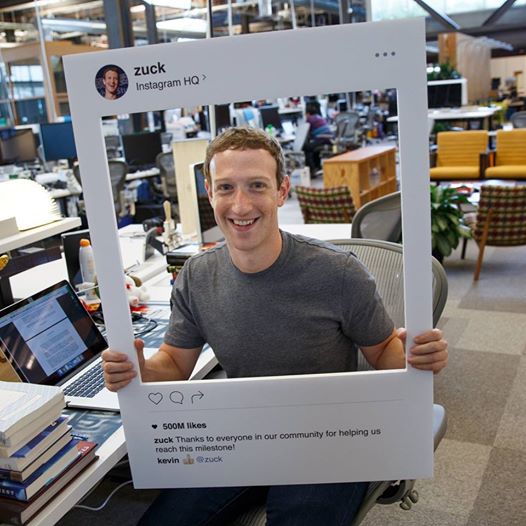 The Instagram community is growing at rapid pace. The Facebook-owned app reported 100M active monthly users since September 2015. Over 80 percent of Instagram users live outside the US. 300M individuals use the Instagram app every day as they flick through various photographs and curate colorful pictures of their own.

Coming back to the Facebook CEO’s picture, everyone on social media loved the picture, but what became the major center of attraction was the MacBook belonging to Facebook CEO Mark Zuckerberg. The webcam of CEO’s laptop was covered up with tape. Also, the mic jack on his Mac appears to be wrapped up with a black tape, although it remains unclear whether it’s some kind of dummy plug or a tape. It sures looks creepy, but it’s a step to keep hackers at the bay.

Apparently, Zuckerberg is enough paranoid about hackers, which made him take the extra step for security, i.e. to shut down prying eyes (if there are any) savvy enough to access the camera’s control.

This, no matter how creepy it looks, is an excellent MacBook security advice for users. According to FBI Director James Comey, wrapping your webcam with a duct tape is a great idea. It should be followed by everyone who wishes to stay away from prying eyes. Even James Comey does the same.

Placing duct tape on your webcam will prevent your pictures from hackers. In a similar manner, placing a duct tape over mic will muffle hearing ability of the computer. However, this does not mean that placing a tape would make your computer hack-proof. It’ll simply keep individuals from plugging headphones into your system.

Well done, Mr. Zuckerberg. Now it feels like we can forgive you for your mistake. Don’t remember which one? Well, we’re talking about “dadada”! Does it ring a bell?

For all those who do not know what the entire fuss is all about, then recently, Facebook CEO Mark Zuckerberg’s LinkedIn account was hacked. The Facebook executive prefers to keep a tab on rival websites, which makes it easier for individuals to find Zuckerberg’s account on platforms like Twitter, Pinterest, or LinkedIn. According to OurMine team of hackers, Facebook CEO isn’t bothered about the security of his accounts on other websites. The hackers managed to get the password of Zuckerberg from LinkedIn’s password dump yard following the recent data breach in the social platform. It came out as Facebook CEO’s password was “dadada”.  The cross posting was on his account, which allowed messages to be automatically posted on the microblogging website Twitter. The Facebook CEO has registered on the platform since 2012, but hasn’t used it even once in last four years.

Twitter immediately discarded all the offending texts and it was quick enough to suspend Mark Zuckerberg’s account temporarily.