Have You Taken A Good Look At The Standard PlayStation 4 Slim Yet?

Sony Corporation, not Kim Kardashian is breaking the Internet today. The Japanese consumer electronics giant is planning to unveil its new PlayStation model. We aren’t sure if the concept is a reality or just a hoax, but as per the reports PlayStation 4 Slim will be surfacing the market next month.

PlayStation 4 Slim – What’s so exciting about it? 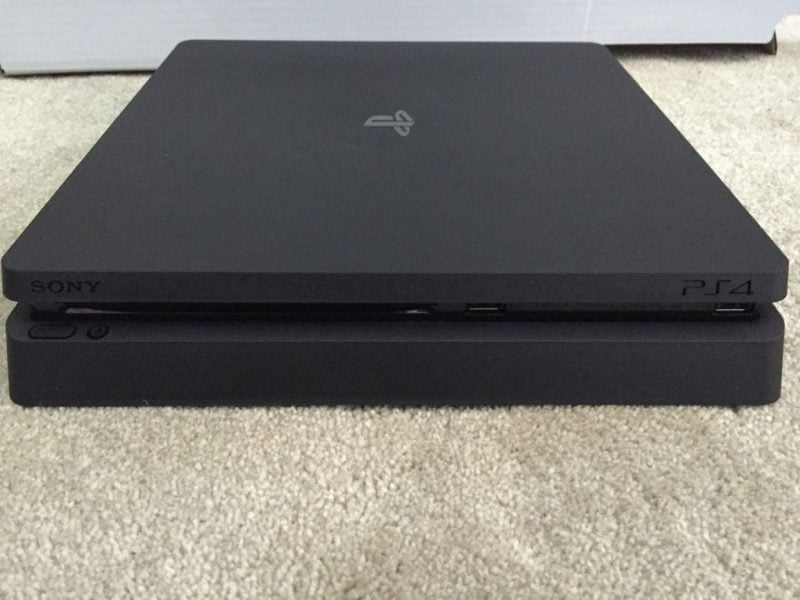 Sony’s PlayStation gaming consoles continue to dominate the giant market of video games. As can be seen, the PS consoles control the largest share of the global gaming business. In fact, the strong presence of the Japanese behemoth threatens fellow competitors like Microsoft’s Xbox. Even as the Virtual Reality becomes the new norm or the latest boom, the interest from PlayStation doesn’t seem to fade away. Moreover, the PlayStation sales were responsible for the major part of Sony’s recent quarterly earnings.

The PlayStation 4 Slim release date is perfectly coordinated with Sony’s one of the biggest upcoming release – PlayStation VR. The VR kit is releasing in October 2016. In other words, Sony is clearly trying to hook the gamers with its back-to-back major releases.

In the pictures released online, we can notice that PlayStation 4 Slim is somewhat smaller in size than original PS4. The model now arrives with real buttons for power and ejection. Surprisingly, Sony has planned 500 GB space for PS4 Slim. Its predecessor arrives with larger space so the news of the upcoming gaming console being small is somewhat difficult to comprehend. Furthermore, the upcoming console is packed. It’s expected that this redesigned PlayStation will be launched at the PlayStation Event. This event is scheduled on September 7th.

As the pictures suggest, the consoles may seem legit in a way, but they aren’t the PS4 models which we are used to. These upcoming gaming consoles have better-rounded corners coupled with PS logo engraved in the middle of the box.

Sony Chief Executive Kazuo Hirai aims to attract a larger chunk of casual PS users along with hard-core gamers. Furthermore, Sony has been trying various approaches to establishing a user community. This is because it solemnly targets to earn regular revenue from software downloads and subscriptions. In June 2016, Sony discussed its plan to unveil a high-end PS4 version with enhanced graphics. But the company has not discussed anything related to refurbishment of its standard PS4 model publicly so far.

Leading analysts suggest the upcoming would be comparatively cheaper than the present device, which is available at US$350. The sales could mark a significant shift strategy for the Japanese consumer electronics giant. This is because Sony was somehow stuck previously due to releasing just one PS device at a time. Also, the company tried to sustain the regular price cuts.

In June 2016, Microsoft Corporation announced they are working on Xbox One S.

There are no reports suggesting the price of the upcoming PlayStation 4 Slim. We will update you as soon as the price comes out.

Sony is finally taking a leap in its leading territory with PlayStation 4 Slim. Let’s not forget the heavily anticipated PlayStation VR release. It looks like the company is leaving no chance to let go of the opportunity, which has finally knocked the door.