The iPad Pro 9.7 is essentially a mélange of the iPad Air 2 and 12.9 iPad Pro. It could either be a delight or a conundrum – or maybe both. Read on Technowize Review to find out!

The iPad Pro is Ryan Gosling-esque attractive, and there is no doubt that you’d instantly fall in love with this piece of metal art. It comes in a much more manageable size, which is 9.4 inches high, 6.6 inches wide and 0.24 inches thick. Its body is encased in a beautiful matte metal finish and delivers quality in four colors: Chocolate and Rose Gold, along with Silver and Space Grey.

With the latest iPad Pro, Apple is nibbling around the edges of quality, with machined speaker grilles. Apple’s design team seems to have packed a punch with such quality sound squeezed into iPad Pro’s 6.9mm thin shell.

The weight range is 437-444 grams depending on which version you get: Wi-Fi or Wi-Fi + LTE. Owing to the size, you could probably use it one-handed too.

Its Smart Keyboard is smaller, but a lot similar to the 64-key layout of the 12.9 iPad Pro. It is 4mm thin, and the keys are completely covered, so liquid spills won’t be a problem. The newer model has TouchID fingerprint recognition and built-in RFID chip support for Apple Pay. It comes with an embedded Apple SIM which is supported in more than 90 countries and territories. 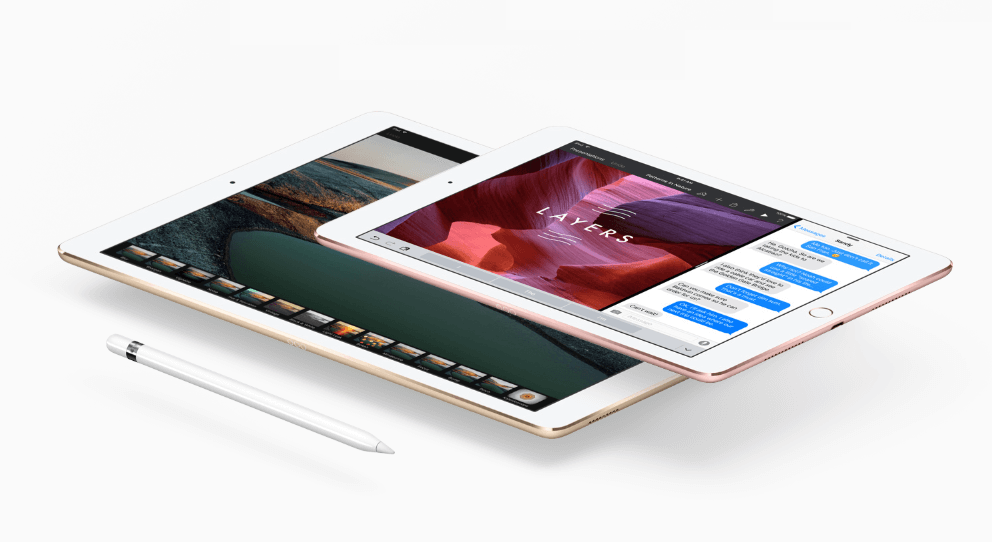 The four speaker grilles (two each at top and bottom) has the same orientation-sensing capability as the larger iPad Pro’s. It automatically varies tonal output to provide premium quality sound no matter how you hold it. The overall audio quality is quite impressive, featuring pleasantly warm bass. 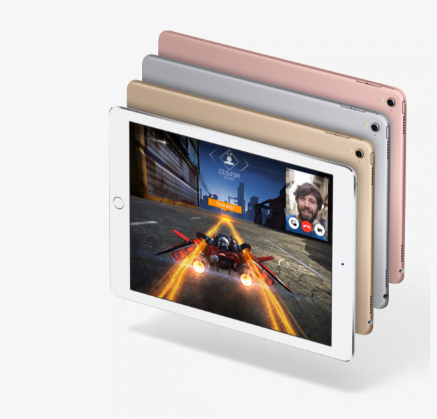 The 9.7 iPad Pro is decked with upgraded front and rear cameras, introduced on the iPhone 6s/6s+ models. The rear camera is impressive, at 12-megapixel (MP), it takes larger Panorama shots (63MP vs 43 MP) and can do 4K video recording (3480 x 2460 pixels). It can also take slow motion video at 1080p and has several improvements compared to the oversized 12.9-inch iPad Pro model. The front-facing ‘FaceTime’ camera is 5-megapixel and has ‘Retina Flash’ (for the first time on the iPad line!), so your selfie game can be taken to the next level.

Integrating hardware and software in a way that nobody has done before is very Apple. Inside the mainstream-scaled 9.7 iPad Pro is Apple’s high-end A9X SoC, which includes the M9 co-processor. It is also decked with a powerful 12-core PowerVR graphics chip and 2GB of RAM.

This means that opening games, using multiple demanding apps the same time with the Apple Split View, and scrolling through websites, is flawless.

The newer model has a large, 29.7Wh battery that will last for 9.5 to 10 hours. If you’re someone like me, who runs a ton of social media apps and Photoshop and a few games like Dots, you’ll probably only have to charge it once every four days or so. 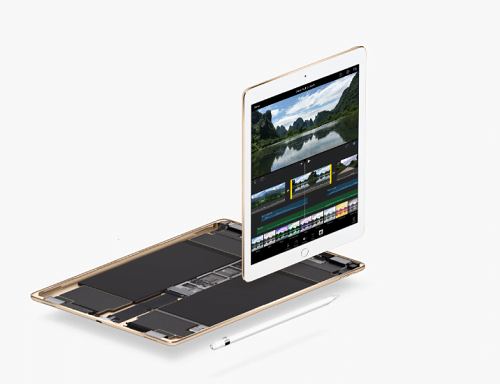 With the latest version of the iPad Pro, Apple has introduced a True Tone Display. The clever piece of technology takes notice of your surroundings and then dynamically adjusts the display depending on the lighting. Apple says the newer tablet has improvement display which is 25-percent brighter, 40-percent less reflective and has 25-percent more color saturation.

For example, when you take the iPad to bed with you, the screen will automatically tone everything down – adjust the display’s color and brightness – and remove blue hues to make the display warmer. It’s easy for nightcrawlers like me who love engaging in reading eBooks and web browsing.

Take the iPad Pro into direct sunlight, and you’ll notice the difference – the screen will be a lot brighter.

The screen is large enough to display documents side by side, and the keyboard is good enough to work as a laptop replacement.

If you’re taking a video or a photograph, you’ll notice that a wider range of colors more accurately rendered on the display. It’s banking on the enhanced color space Apple had previously added to the 2015 model retina iMacs.

The 9.7 iPad Pro and iPad Air 2 are the same size but you’ll probably have to look for different cover/case accessories due to the unique positions of the smart connector, the speakers, and the internal magnets.

If you truly want to deck it up with Apple Pro accessories, it will probably set you back by – $299 for the Smart Keyboard and $169 for Apple Pencil. The Apple Smart Cover will cost $75 while the Apple Silicone Case will cost you $109.

Having fundamentally good options is a good thing. When you have too many options, you fall under the conundrum of a multitude of choice. It’s always better to have the competition cut down to two good alternatives. So, here we have, the 9.7 iPad Pro vs 12.9 iPad Pro. It’s like MacBook Pro vs Retina MacBook Pro.

The bigger question ia: Is the 9.7 iPad Pro a legitimate laptop alternative? Portability, it seems, is the forte of the newer, smaller, iPad. It is far more portable with notable features the oversized model from its flagship line of iPads doesn’t have, including better cameras and the ability to use the screen as a flash for taking selfies. Whatever remains impressive in its big brother is quickly overridden by its bulkiness and additional weight.

Beyond the good reasons of portability, the mainstream-scaled 9.7 iPad Pro is the bigger brother of the 12.9 iPad Pro. Our gut feeling says most people will opt for iPad Pro 9.7 for its processor speed, the addition of Pencil and Smart keyboard support, and the upgraded cameras and display.

LookSee, a Smart Bracelet that Lets You Customize Imagery