Thick and heavy VR cables are one of the major issues surrounding the current batch of virtual reality headsets. The cables can disturb your movements while playing a game with your VR gear on. We’ve seen social media platforms flooded with user complaints related to the troubles caused by thick VR cables. 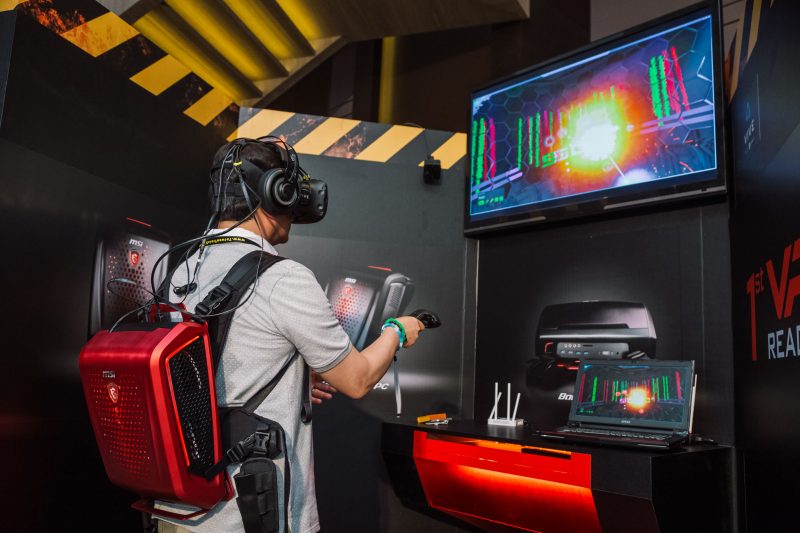 ‘Urgh, I broke my nose today while experiencing a mind-blowing Armor MMO game on my Oculus VR.’

“Yesterday, I was trying Elite: Dangerous with my kid using my all new HTC Vive. Unfortunately, I tripped over and broke my neck! Jeez, it hurts! Guess VR could’ve been simpler.”

These are the common issues faced by the users. Tripping over a dense wire or falling face flat on the hard floor, it’s all usual with VR.

In order to help get rid of this misery, some companies have arrived with a solution of VR backpacks. Surely you’re quite willing to ask what exactly a VR backpack is. Well, it looks like a backpack, which carries a full-fledged VR PC. This way, it enables you to move around freely during your VR session without hampering your movements.

MSI VR Backpack launched at Computex 2016, MAY NOT be a lifesaver for VR gamers. We aren’t sure how you would term it because the idea of a VR backpack is great. We might want to rate the gadget well for taking the initiative. It’s pretty cool, but frankly, it’s lame and surely not worth the hype.

The version of MSI VR Backpack is called as the Backpack PC. And since the PC was displayed at Computex 2016, we thought, why not try it?

Equipped with GeForce GTX980 graphics card and an Intel Core i7 processor the backpack weighs somewhere around 10 pounds. Sure it sounds pretty heavy, but much to our surprise, the rig didn’t feel much heavy when we strapped it on.

The backpack we tried was attached to Vive. After strapping the headset on, we tried a game demo. It was found that with the help of MSI VR Backpack, a user can move around with an ease. If you’ve experienced the normal HTC Vive, you’ll want to admit the absence of thick cables makes a really good experience.

Instead of worrying about the cables wrapping around your legs or worst falling down and breaking your neck, you can simply enjoy the experience.

But, wearing a backpack somehow sounds a lame idea. Also, the low battery life would require you to keep charging the backpack every hour. If the company can come up with longer battery life, then it seems slight worth.

In reality, what the VR lovers need is getting rid of the long-wired cables, but sure they do not wish to strap on the backpack either while gaming. The VR experience should be absolutely carefree and trouble-free. Similar to how we do not prefer our smartphones to be accompanied by thick cables, VR is about to become a part of our normal lives. Certainly, we wish to see the advancement of going wireless in our VR kits as well.

Arriving back to MSI, the company is yet to announce the Backpack PC price and availability, but it should be out later in 2016, according to the company.

It won’t be popular for regular use at homes. But, the chances of adoption by amusement parks, in-store demonstrations, or real estates are very high.

Also Read: Dip into Your Private VR Kitchen with IKEA