Tesla and SolarCity Empowered an Entire Island with Solar Energy

This week, Tesla Motors acquired SolarCity, which is a solar energy service provider. Even before this acquisition formally took place, both these companies have worked together. The founders of SolarCity, Peter and Lyndon Rive, are Elon Musk’s cousins. Due to his interest in renewable energy, Musk is also a chairman of SolarCity. Both these companies have similar objectives and hence it comes as no surprise that the acquisition took place. The monetary value of this acquisition is said to be $2.6 billion. But before signing the deal, both the companies had already begun a solar project together. In this project, Tesla and SolarCity will provide solar energy technology to an entire island.

The Ta’u Island in American Samoa is not densely populated. It only has a population of around 600 people. Tesla and SolarCity will provide nearly 100 percent of the power required through solar energy to all the people residing here. This will be a great step to promote the use of renewable energy as a major source to cut down on the carbon emissions.

About the solar project by Tesla and SolarCity

This solar energy project has received funds worth around $8 million. The project will not only cut down on the carbon emissions of the island, but will also significantly reduce the fuel costs for the Ta’u Island. In order to achieve this aim, the companies have installed a microgrid of solar energy and batteries in the past year. This will prove to be a supply to the power needs of the residents of this island.

The Ta’u Island is a 17-square mile volcanic island which has a single road running through it. It is 4,000 miles away from the west coast of the US. Due to its location, it relies on diesel generators as its source of power. These generators are placed along the only road this island has. This has imposed notable logistic problems for the residents of this island. In order to change this, Tesla and SolarCity decided to install solar microgrids over here. 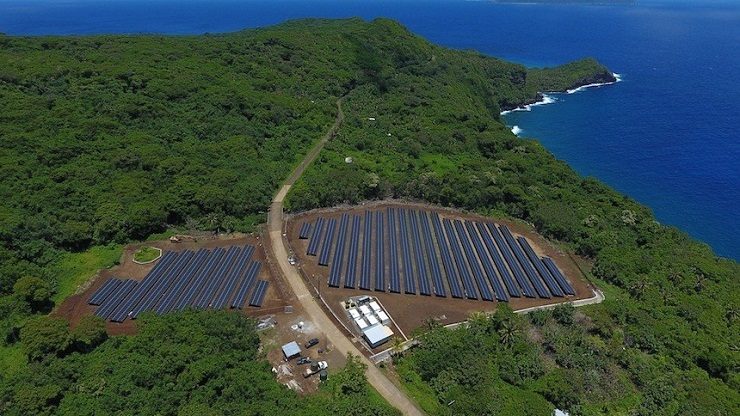 Tesla and SolarCity have set up a solar energy project in the Ta’u Island.

The 5,328 SolarCity Panels will provide 1.4 megawatts of solar energy generation capacity. Apparently, the 60 Tesla PowerPacks will yield six megawatt hours of battery storage. All these sources of solar energy were set up within a span of one year under the scrutiny of Tesla and SolarCity. With the help of the storage batteries, solar energy will be available round the clock. These batteries also make sure that the users don’t witness power cuts. This entire solar project is financially supported by the Environmental Protection Agency, American Samoa Economic Development Authority, and Department of the Interior.