Amazon has received immense recognition for its higher-end Echo speakers, like the Echo Studio, the new 4th Gen Echo, and the humble Echo Dot which are by far the most famous speakers in the lineup.

The current design is a double-edged sword. It’s undoubtedly more attractive to look at and shakes all the prejudices of what a smart speaker can look like. It also produces slightly better sound quality from the same 1.6-inch speaker that’s installed inside. It is available in charcoal, glacier white, and twilight blue flavors, the fourth-gen Echo Dot indicates a major difference regarding the speaker’s look and feel. Amazon has also given a new shape to the Echo Dot.

The latest 4th Gen Dot shares the current spherical design of its larger sibling but on a smaller scale. It’s instantly available in three different models: the standard model for $49.99, a version with a built-in LED clock for $59.99, and a Kids Edition that bears a cute tiger or panda design for $59.99. The 4th Gen Echo Dot continues as an outstanding budget smart speaker, even at its full value. The LED model is great for a nightstand, where one can use it as a smart alarm clock programmed by voice. The LEDs display the time by default, but they can also show the current temperature when asked, or display the volume level from one to ten. The Kids Edition Echo Dot one of the cutest smart speakers available in the market, with its tiger or panda patterns and softball size. It also provides a year of Amazon’s Kids Plus service (formerly known as FreeTime Unlimited) that gives access to kid-friendly audiobooks, crafts, and games, along with an array of parental checks. Amazon will also substitute the Kids Edition for free within two years of purchase depending on your kid’s choice. 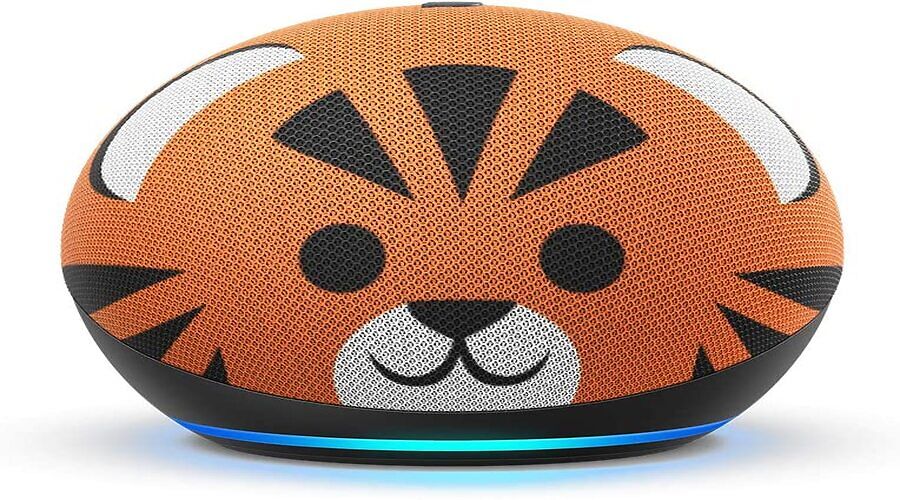 Kids Edition with a Tiger Design

As with earlier Echo Dots, the latest Dot is equipped with volume up/down, mic mute, and action buttons that peep out from the fabric at the top of the speaker, although the buttons are now more tightly arranged than they were on previous Dots. There’s a little more detail and devices don’t sound considerably as cluttered as they would on earlier hardware. If you favor hip-hop or bass-heavy trap music, the refreshed Echo Dot sounds slightly better. That’s probably due to the greater volume of the speaker. The Amazon Echo (4th Gen) sounds much better than prior generations of Echo speakers thanks to its bigger drivers. This Echo consists of three drivers in total: two 20mm tweeters and a single 76mm neodymium woofer. The Echo Dot’s exceptional innovation is Alexa, and those who are already accustomed to Echo speakers are aware of the features. Chatty, automatic, and ever-friendly, Alexa can handle various questions and requests, like providing you weather reports, settings timers and alarms, reminding you of your schedule, and telling jokes.

Being Alexa-compatible, Echo Dot is able to manage all compatible smart home devices. It can also answer questions concerning the weather, simply as you can do with the Amazon Echo Buds (2nd Gen) when connected to the Alexa app. You can also play music straight from the speaker simply by asking Alexa and the assistant was also effective with controlling playback. If you do not wish to use Alexa there are also buttons made into the top of the speaker for playback. It has an action button, a mute button, and two volume buttons as well.

How to connect to the Amazon Echo (4th Gen)?

Connecting to the device to play music on the Echo (4th Gen) is simple. All you have to do is simply plug the speaker in and download the Amazon Alexa app. The app will walk you through the entire process of connecting a new device to your Wi-Fi network to get it all set for usage. Once your speaker is connected to the Wi-Fi network, you can start playing music with Amazon Music and audiobooks with Audible. You can also change it to something like Spotify by downloading an Alexa skill, but Amazon installs its services as the default when you plug it in the beginning. The Echo (4th Gen) also supports apps like Apple Music, Apple Podcasts, Pandora, Deezer, SiriusXM, Tidal, and Vevo.

If you do not want to use your voice, the Echo (4th Gen) has Spotify Connect built-in so that you can play music straight from the Spotify app without employing Alexa for this. The Echo (4th Gen) also has Bluetooth 5.0 feature so you can use it like a normal Bluetooth speaker and also if your device is not able to connect to Wi-Fi. Even though it has Bluetooth 5.0, the Amazon Echo (4th Gen) isn’t a portable speaker. It needs to be plugged into a socket at all times via the 30W adapter on the back. The power cable that comes with the speaker is all white and extremely long, so you do not have to deal with any issues like reaching an outlet.

Our Verdict: If you wish to buy a smart speaker that has excellent sound quality and provides you access to all of the devices compatible with Alexa, then yes, the Amazon Echo (4th Gen) is a worthy pick. And while the modern Echo Dot has a more exciting design, it is sure to be liked by many.