The Batman Drives the Batmobile to Rocket League

Inspired by the movie, the Batmobile’s bells and whistles will give players an added thrill.

The release of the movie The Batman has prompted Rocket League to bring the iconic superhero back in the game.

Rocket League is a soccer-based video game, developed and published by Psyonix in 2015. The game became free-to-play in September 2020. Although it is free, a paid premium option gives players access to additional items that help them level up. It was released as a sequel to Battle Cars and received a number of awards for its graphics and presentation. By the beginning of 2018, the game had amassed over 40 million players and become one of the most popular video games.

In the game, players use a rocket-powered car to chase the ball towards the other team’s goal area. Mid-air, players’ cars are capable of jumping to take a shot or use a boost to propel themselves forward.

Eventually, the game was adapted as an esport, wherein professional players participated through ESL and Major League Gaming.

The game is available on Microsoft Windows, PlayStation 4, Xbox One, macOS, Linux, and Nintendo Switch. The mobile version of the game Rocket League Sideswipe is identical to the original and available in 3D for iOS and Android.

In 2016, looking at the growing popularity of the game, Psyonix launched the Rocket League Championship Series with a prize money of $55,000. 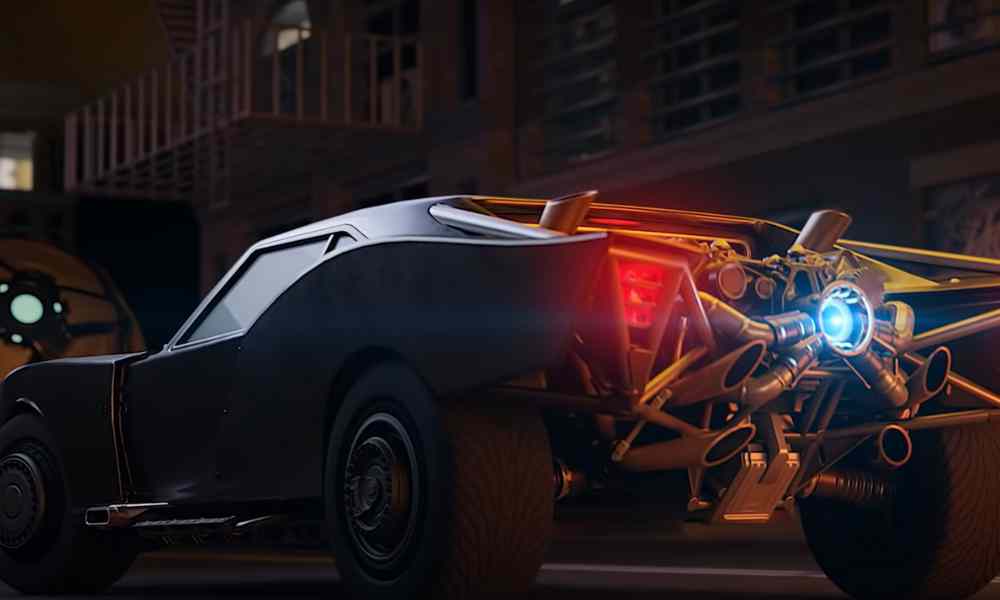 The Arrival of the Batmobile

While the masked man takes rest beneath Wayne Manor, Gotham City descends into chaos as villains with supersonic abilities take to the streets. There is no time to waste as the vigilante must don his cape to rid his beloved city of crime. To do this, he cruises around Gotham aboard the updated Batmobile.

The Batmobile, the heavily armored vehicle driven by Batman, is available as a paid DLC for Rocket Leaguers. Players can now access The Batman Bundle for 1,100 credits. The items available in the bundle can only be attached to the 2022 Batmobile, as it cannot be clubbed with any other item or customized differently. The only exception to the rule is The Batman Goal Explosion which can be fitted to other cars.

The new version also has some cool features like wheels, a boost, a trailer, and a Dark Knight matte paint finish. Players can also explore a goal explosion themed around the Caped Crusader and a Real Life Decal. Furthermore, the recent Batmobile has been inspired by the one driven by Robert Pattinson in the 2022 movie.

The slick machine promises to get one’s emotions into an overdrive as players channel the crusader’s anger and angst in their mission.

Rocket League has also released a limited-edition Gotham City Rumble, which adapts the Rocket League Rumble with new elements of the Batman villains for an adrenaline-fueled gameplay. The Joker’s Boxing Glove and Poison Ivy’s vines will get a makeover while the Bat-Grapnel works like a magnet and the Clayface Spikes to sow terror near the arch.

In 2021, Psyonix, the San Diego video game developer, opened its gates to the masked crusader for the annual Haunted Hallows Event. The in-game event featured new challenges, the three Batmobiles, and a new Arena variant.