The Luminous Flight Paths of Quadcopters by Raffaello D’Andrea 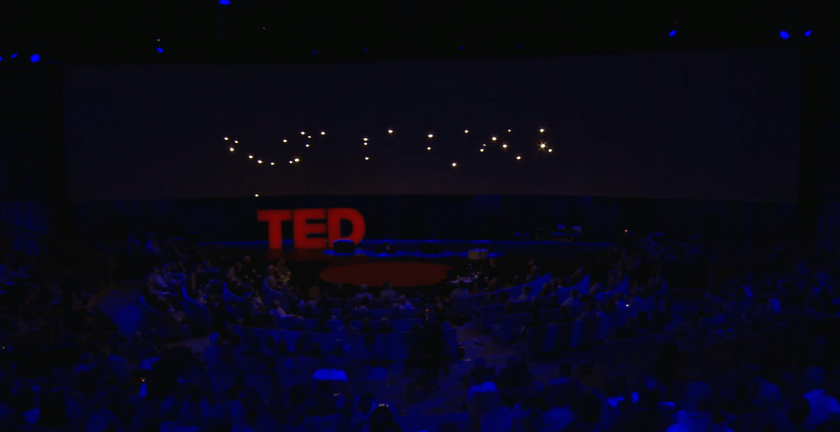 Firefly emulating quadcopters bring magic to the night during TED in Vancouver.

The Vancouver Convention Center in Vancouver doesn’t typically allow quadcopters or drones of any kind for that matter.

But all of that changed amid the glitz of augmented reality – virtual reality demos when a swarm of firefly emulating micro-quadcopters made an appearance during Raffaello D’Andrea’s demo of well, drones.

D’Andrea demonstrated the use of new localization technology wherein each flying machine used on-board sensors to make out its location in space and on-board computation to make certain of what its actions should be. The only external commands used are “take off” and “land”.

Today’s aircrafts are receptive to disturbances such as wind gusts. D’Andrea’s ETH team in Zurich is developing new control architectures and algorithms that sees to this limitation. This would ultimately make aircrafts capable of recovering from disturbances no matter what state it finds itself in.

D’Andrea demonstrated a slew of drones and micro-quadcopters, including a peculiar looking omnicopter, which has 8 running propellers, and thanks to its perfectly symmetrical design, it is ambivalent to its orientation. This gives the aircraft an extraordinary capability to hover anywhere it wants, irrespective of where it is facing or how it is rotating.

During this series of nifty demos, the autonomous systems expert also showed off a single propeller drone, the monospinner that was invented only a few months ago. The monospinner is the world’s mechanically simplest controllable flying machine. It has no flaps, no ailerons, no hinges, no actuators, or control surfaces, but just one single propeller.

Believe it or not, this is a major breakthrough in the world of flying objects. The world has never seen a flying object with one single propeller (moving part). Typically, an aircraft consists of two moving parts, i.e. the propeller and the tail rudder.

For D’Andrea’s exhilarating finale, the ETH team sent up 33 micro-quadcopters that resembled a swarm of fireflies. The autonomous systems expert who develops quadcopters gave everyone a glimpse of futuristic drones, more advanced than ever. Some of these tiny flying PYTs, each weighing less than a slice of bread, are even capable of functioning in tight spaces, a function that would prove to be extremely useful during drone racing.

Let’s take a moment and appreciate how incredible these ultra-advanced tiny drones are. Raffaello D’Andrea’s work showcases the beauty of human ingenuity and nature. Lastly, let’s not forget that what D’Andrea has single-handedly created, gives us a glimpse into a promising future of drone technology.