The world’s largest Xbox Series X is here, and it’s bigger than you can even imagine.

The new Xbox is enormous, like a fridge, but the exciting part is that it is unbelievably functional. A popular YouTuber by the name of Michael Pick was inspired by Microsoft’s creation of an Xbox Series X refrigerator.

Fans are thrilled because no one has ever seen anything like it. The regular Xbox Series is definitely no match for this new Xbox.

We’ll go over everything we know about the Xbox Series X.

Everything you need to know about the new Xbox 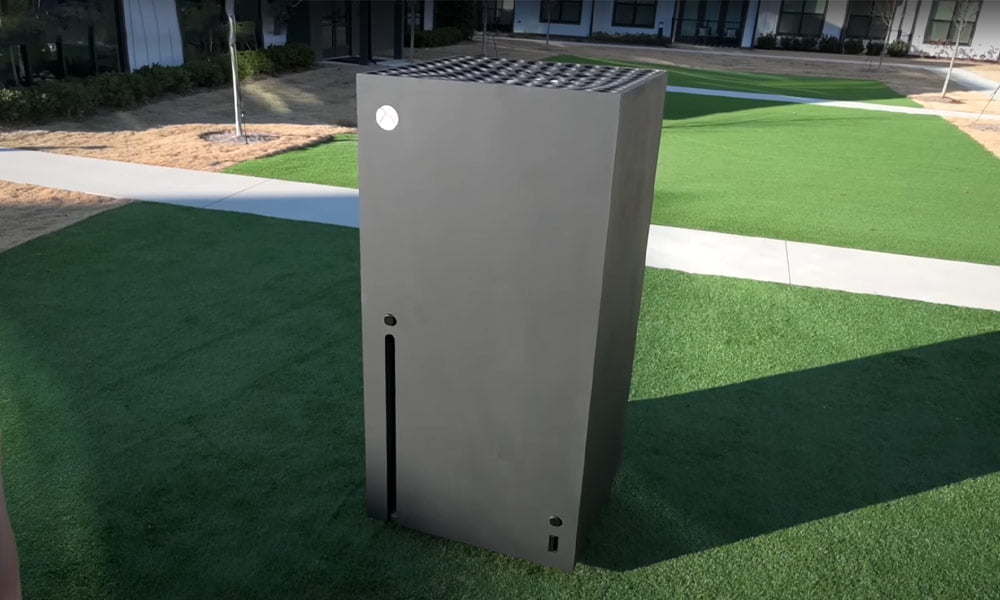 His new Series X has a unique and compelling design and looks more or less like a rectangular box. It is also about 6.83 feet tall and weighs up to 250 pounds.

According to reports, the Xbox X Series is said to be 600 times larger than the usual Xbox consoles we know of. Compared to the Xbox refrigerator released by Microsoft, this large console is far more functional in different ways. Firstly, Pick went all out to ensure that the front part of the box was functional. He added buttons to the front and made them work when pressed. From reports, once you click on the buttons, a connection is made to an Arduino board, which then sends a signal to some tiny robots. The bots then locate the necessary buttons on the main Xbox X, which is found in a drawer on the rear.

He also added some minimum functionality to the back side of the box. He went as far as labeling the ports behind, but they do not work. But the uniqueness of the back design is splendid, at least compared to the box released by Microsoft, which had no such labeling.

Pick also designed the sides and top of his Xbox to look exactly like the original ones by adding the necessary curves and stature. He also added the Xbox logo, which illuminates light when turned on. After he was done with the entire project, he transported it to his colleague, ZHC, who is a fellow YouTuber like himself.

On the other hand, ZHC was surprised at the outcome but also put in his best to design the Xbox X perfectly. The result was totally splendid and made the news.

However, there was a lot of excitement from many kids at the YMCA’s youth and teen development center after Pick donated his Xbox Series X to them. He also mentioned in his video that he was open to collaboration from people who worked at hospitals. He asked for them to reach out to him if they would love to work with him pretty soon.

Another exciting thing regarding this Series X is that it has been recorded as the largest Xbox Series in the world by the Guinness Book of World Records.

Pick went all and beyond to break the internet with his simplistic and gorgeous Xbox design. It’s functional and can do a whole lot more than expected. We can’t wait to see what next he has for us.

The new Xbox Series X is worth looking at because it’s the largest anyone has ever seen and it comes with some exciting perks and features.