Miniaturizing is not a concept unknown to the techno world. Following the tradition, MIT researchers have developed cell-sized robots which can sense the environmental dynamics, store them in their memory and perform the complex computing operations for analytic purpose.

The concerned MIT team started with designing an electronic circuit framework which must be mounted on microscopic particles called colloids and operates independently of any outside support.

In detail, colloids are “insoluble particles or molecules anywhere from a billionth to a millionth of a meter across, are so small they can stay suspended indefinitely in a liquid or even in the air”, mentioned on MIT news blog.

These tiny size robots are crafted out of two-dimensional materials which can float on the back of colloids. 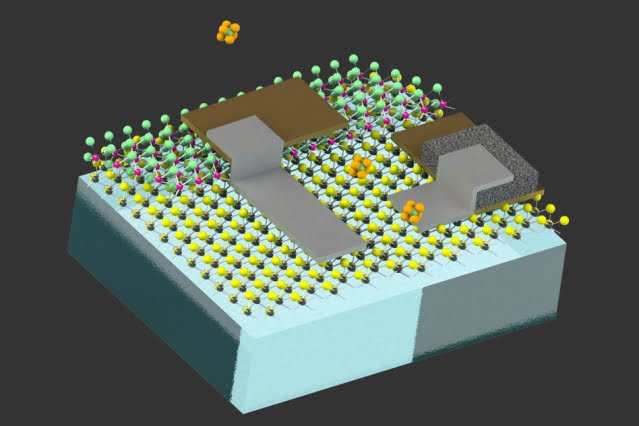 Diagram illustrates the design of the tiny devices, which are designed to be able to float freely in liquid or air. Source: MIT News

In contrast to other miniature robots that require an external force to function, these cell-sized robots are self-powered.  “A simple photodiode provides the trickle of electricity that the tiny robots’ circuits require to power their computation and memory circuits,” informed Michael Strano, the Carbon C. Dubbs Professor of Chemical Engineering at MIT and senior author of the subject concern.

These robots of human egg size can travel to hard-to-reach places such as human digestive systems for diagnostics purpose. The nano robots can float in the food pipe and monitor the organs, and collect the precise data for the right treatment, to begin with.

The self powered robots can even detect the leaks in oil and gas pipeline or gauge the compounds’ content inside a refinery or a chemical processor. Presently, these tasks are done by physical crew employing expensive instruments. These cell-sized robots could be pushed inside the pipeline, flying with the air flow, storing the data meanwhile and then passing on the readings to the instructor. In this way, the instructor could inspect the amount of contamination found in the refinery or oil in a relatively smoother process.

During pilot testing, the MIT researchers said that the device does not incorporate a timing circuit so it becomes difficult to identify the location of the data reading.

The improvement work on these cell-sized robots is still going on. The team is currently working on enhancing communication capabilities so that these nanorobots can transfer the information without any physical contact.

MIT Researcher Team on the Project

Other than Strano, Volodymyr Koman, MIT postdoc, is the lead author of the paper which was published on July 23, 2018, in the journal Nature Nanotechnology.

As a demonstration of how such particles might be used to test biological samples, the team placed a solution containing the devices on a leaf, and then used the devices’ internal reflectors to locate them for testing by shining a laser at the leaf. Source: MIT News

Why Is Colloid Support Needed?

Unlike traditional microchips, like silicon-based or CMOS that have a plane, rigid substrate Koman realized that this electronic circuit would not perform properly when attached to colloids as it can lead to complex mechanical stresses while flying in the surrounding. Also, these chips need a lot of energy to launch.

In that case, the lead researcher experimented with “two-dimensional electronic materials, including graphene and transition-metal dichalcogenides”. During the process, he found that the new thin-sized electronics could be grafted on colloids, staying operational even after being propelled into water or air. Still, the question remains, “why can’t these cell-sized robots float alone?”

To this Strano replied that these cell-sized robots are too weak to hold together and operate on their own. He added, “We need to graft them to the particles to give them mechanical rigidity and to make them large enough to get entrained in the flow.”