This Haptic Armband Can Mimic the Sensation of a Human Touch

One of the outstanding challenges in VR technology is still the ability to touch virtual objects and to feel the sensation of a virtual touch. But this challenge doesn’t look like a hard nut to crack in the nearest future, appraising with what has been developed so far.

Assistant Professor Heather Culbertson of USC’s computer department recently developed a device that mimics one’s touch, allowing users to feel virtual touches as though they are real, USC news reports. The device is a haptic armband which mimics the sensation of a finger; various gestures used in social touch. It’s ideal to say that its sense of touch could be very promising as a technology that can deliver advanced VR experience that has been on a wait while the report acknowledged the armband can serve as a therapeutic tool for patients with anxiety.

Having worked at Stanford University as a research engineer before joining USC in January, Culbertson’s former colleagues were part of the research team in the study which she presented at the IEEE Haptics Symposium this year in San Francisco.

Electronics of the haptic armband

The wearable textile is attached with tiny speaker actuators that vibrate to produce varied sensations. Its movement, usually a rise and fall, controlled by an algorithm is timed to create a ‘haptic illusion’ which feels like a real human touch.

“With this device, we’re creating the illusion of lateral side-to-side motion using vertical up-and-down motion. The speakers indent into the skin one at a time to simulate the feeling of continual movement,” Culbertson said. 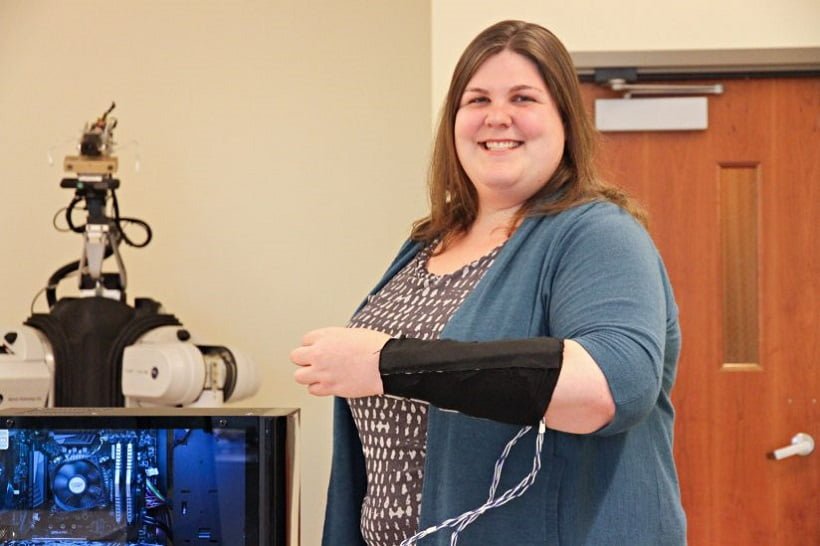 The technology is expected to be used as a therapeutic tool for individuals at risk of isolation or people with anxiety. It could also be used in communicating with the people with visual impairments.

It’s very difficult to simulate a long mechanical motion such as a finger dragging along the skin in a small space, said Culbertson. “This is the first prototype, but it’s surprisingly effective.”

Getting the right sensation is very crucial when it comes to haptics, she added.

Haptics is about mimicking the human touch

Haptics involves technology for the sense of touch which is currently available in many consumer devices such as smartphones, controllers for video games and smartwatches. Culbertson’s specialty is social haptics, an emerging area in the field which seeks to simulate elicit emotions using artificial means.

Experimenting with materials for low-cost prototypes

Vibration is the basics of most electronics offering haptic feedback. But applying the technology in a wearable device for socials, the researchers worked hard on creating something with more natural sensation.

While experimenting, Culbertson and her team found that magnets created a more natural sensation repelling into the skin. Using six small low-cost cost exciter speakers the team built a mechanical device by embedding them into a lightweight fabric sleeve, applying the same principles. The speakers were driven at low frequencies, causing them to produce motions instead of sound or vibration produced by high frequencies.

The researchers found that the technology created creepy feelings similar, similar to something crawling on the skin when they used short pulses with long delays. On the contrary, a most realistic sensation was created from long pulses with short delays.

Aside from social applications, Culbertson said the technology can also be used in car seats to provide drivers with directional information such as warnings for blind-spot and alerts.