In order to showcase the competency in artificial intelligence, Sony Corporation is re-launching its iconic robotic dog, aibo (Artificial Intelligence roBOt) in the United States after more than a decade. The Japanese company announced the arrival of aibo at a press event in New York on Thursday.

The US launch of aibo called the First Litter Edition will be available for a limited time at a whopping price of $2,899. The pre-orders will begin in September and the company expects to ship the consumer robot dogs during the holiday season.

In detail, Sony’s robotic dog has a unique ability to learn, recognize and remember human faces. The system is built on a neural-network-based skill set to see, hear, observe and understand others through expressions instead of voice commands only. 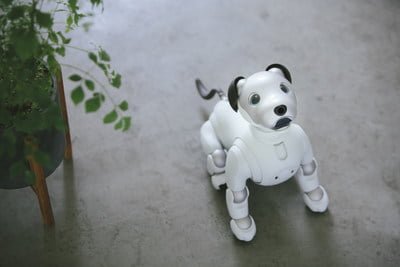 Over a time, these robotic dogs will develop their unique personalities by remembering what makes their owners “happy” or “not happy”, detecting words like “bad”, “no” or praising phrases and observing facial expressions such as smiles.

So, even if all aibo units come with the same mechanical configurations, through daily interactions with a diverse set of humans, no two robotic dogs will appear (or behave) in the same pattern.

Thanks to deep learning, these AI robotic dogs can become the best companions to their owners. In fact, in Japanese aibo itself means ‘companion’.

“aibo’s charming personality, dog-like behaviors and ability to intelligently interact with family members help to create a personal bond,” said Sony President Mike Fasulo. “Bringing aibo back to the U.S. reflects Sony’s broader commitment to provide consumers with products that not only entertain them but also enrich their lives,” he added.

Available in White Ivory color, aibo is powered by a Qualcomm Snapdragon processor and gets the support of both Wi-fi and LTE connectivity via AT&T.

To give life-like dog personality to aibo, Sony has integrated Ultra-compact 1-axis& 2-axes actuators to facilitate free movement of the body along a total of 22 axes. They are head: 3 axes, mouth: 1 axis, neck: 1 axis, loin: 1 axis, forepaws and back paws: 3 axes per leg, and ear: 1 axis at each ear, and tail: 2 axes.

The First Litter Edition box is packed with a robotic dog aibo, fun accessories and toys like a pink ball and a toy-bone for aibo, a 3-year AI cloud plan and an individually numbered dog identity label.

The latest generation of aibo is an outcome of Sony’s commitment to “technology innovation, particularly in the areas of AI, robotics and image sensing”, as mentioned in the statement.

Sony robotic dog will be available for a limited order at a whopping price of $2,899 in the US. Source: Sony

The First Litter edition aibo will be the 6th generation (model number ERS-1000) of Sony’s consumer robotic dogs which were first introduced in 1999. After this, the company launched a new robot dog model each year until 2006 when it discontinued the product.

Back in October 2017, Sony announced it was bringing an improved version of its popular robotic dog back to Japan. It released a new generation of aibo in January and since then about 20,000 units have sold in the domestic market. However, the company does not aim to sell their latest AI robot dogs to such an extent in the US.

“It’s not a product I want to push and drive hard for revenue. It’s more [about] innovation and how the best of Sony comes together,” mentioned Fasulo. “It really is a true expression of the brand.”

Thanks to deep learning, these AI robotic dogs can become the best companions to their owners.
Source: Sony

Sony: The Once Upon A Time Leader

Sony, the inventor of Walkman personal music tape player, Trinitron televisions and floppy disks was once a pioneer in transistor technology and aking of consumer electronics. The company sold products by the brand name itself– “It’s a Sony”.

Even with such strong brand equity and a loyal consumer base, Sony, however, could not adapt to dynamic market behavior. Meanwhile, the innovation giant Apple and Korean conglomerate Samsung swept way its tech-savvy market forever.

Nonetheless, Sony now intends to re-introduce itself to the tech-loving US citizens with a bang. And with that target in mind, what’s better than a coming up with a personal companion fusing robotics and artificial intelligence together!