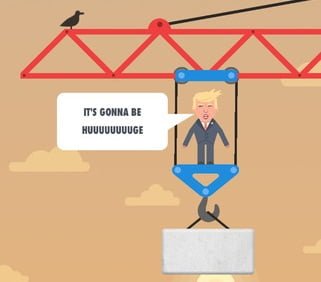 Do you know there’s a game called Trump’s Wall for iOS users? Well, now you do, in case you weren’t aware of it. The game arrives from the house of The Blu Market and the music ‘Stars and Stripes’ is provided by Jay Man.

There was a time when Donald Trump used to be entertaining. His funny concepts on how to make America great again used to make us laugh. People started attending his shows, debates, etc., just to have fun watching him mock people. But when we look back, we realize the man and his ideas are less funny now and he’s only a step away from becoming the next President of America. Now, his debates make some sense and rather serious instead of making everyone laugh.

If you want to transport yourself back in those simple, funny time, where Trump’s ‘make America great again’ debates were enjoyable, Trump’s Wall for iOS is just for you. 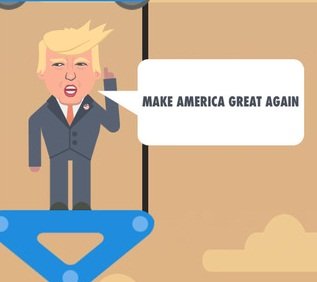 The game is very simple with ducks pooping all over the yard of Trump. Trump plays the role of an operator of heavy equipment attempting to construct a wall to drive ducks away from crapping on his house’s wall. Surprisingly, the house looks familiar to the White House.

You have to simply stack the blocks higher without letting a single block fall on the ground. If you do, be prepared to hear ‘You’re fired’ from Trump and start all over again.

Throughout the process of building, you’ll be hearing Trump shouting Make America Great Again and all sorts of Trump-isms, which includes making subtle jokes about his fellow candidates.

All characters portrayed in the Trump’s Wall are entirely fictional (even the characters based on real people). The sole aim of the game is for refreshment and humor. So how about trying? The game looks absolutely fun.

This Is Why Chinese Officials Won’t Unblock Facebook In China