Google, Facebook, and Twitter have joined hands with global news organizations to fight the spread misinformation across the internet. The initiative is in order to combat fake news and identifying reliable news sources. Trust Project brings around 75 news organizations and tech firms together to stop the spread of phony news.

The international consortium of news and digital companies, Trust Project, is an intiative of Markkula Center for Applied Ethics at Santa Clara University. To begin with, the collaboration is aimed at bringing in transparency and building a reliable press. For this reason, people are interviewed worldwide to understand what makes a story trustworthy. The project is run by Sally Lehrman, a journalist who worked with top news leaders. With their help, she designed the digital system dubbed Trust Indicators.

Under the project, the tech firms will be tagging news organizations on news stories to meet the standard of ethics. According to the recent reports, the indicators will appear as symbols in online journalism. The reporter’s name, credentials and other details will be there with the news. 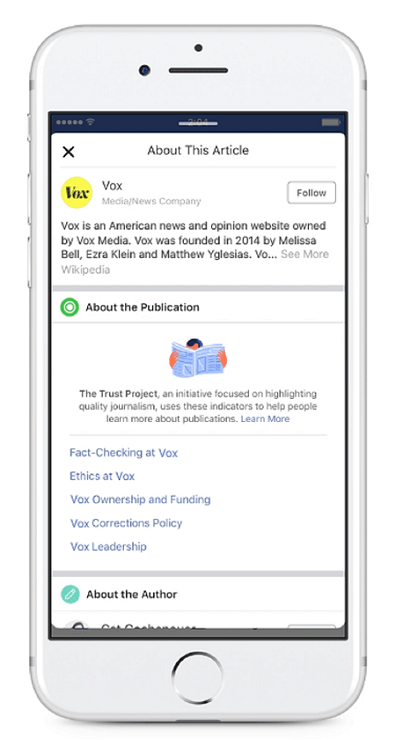 As mentioned on the Santa Clara University website, Sally Lehrman said, “In today’s digitized and socially networked world, it’s harder than ever to tell what’s accurate reporting, advertising, or even misinformation.” She spoke on how the public was being cynical about getting credible news. “An increasingly skeptical public wants to know the expertise, enterprise and ethics behind a news story,” stated Lehrman.

The online platforms will be provided “trust indicators” in order to help users, “assess whether news comes from a credible source they can depend on.” Lehrman discussed about the difficulties faced in the digital era with no accurate reporting or advertising taking place.

Let’s talk about the money!

The project has received funding from Google, the Democracy Fund, the John S. and James L Knight Foundation, and the Markkula Foundation. Apart from that, the founder of Craiglist also was an early supporter by providing them funds. Craig Newman, founder of Craiglist spoke on consumers’ expectations. He said it is important to study their news consumption and what they would pay for

What’s the word from Tech Firms?

As has been noted in reports, Facebook will be including the Trust Indicators to its information button. This will provide context about the articles in the news feed. Meanwhile, Google is looking into ways of using indicators that could appear alongside the articles on Google services.

Product manager at Facebook, Andrew Anker spoke how the users will be able to identify fake from the real. Also, by helping the people access this, they can check if the news is credible or false.

The Vice President of Google’s News Products appreciated the indicators. The indicators would be of help to the algorithms understand authoritative journalism.

Occassionally, Twitter and Facebook have been under the fire for carrying out fake news in the past. In the long run, the Trust Project will save people from not being misguided by wrong information.