Immersive technologies have pretty much become the new battleground at every game expo in the last few years. This year alone, consumers will spend $5.1 billion on virtual reality hardware, accessories, and software, up from $660 million spent in 2015. Meanwhile, the global market is expected to grow to $8.9 billion in 2017 and $12.3 billion in 2018.

Major players like Oculus, Microsoft, HTC, and Sony may have leapfrogged to gain the attention of ultra-high-end PC gamers. But, what do gamers really think about it?

Behind all the hype, very few – at least enthusiasts – have any clue about the major virtual reality headsets that have launched or will launch later this year. Recently released Nielsen’s 360 Gaming Report for 2016 shows, the majority of gamers have not heard of the Oculus Rift, or HTC Vive, or Samsung’s Gear VR. 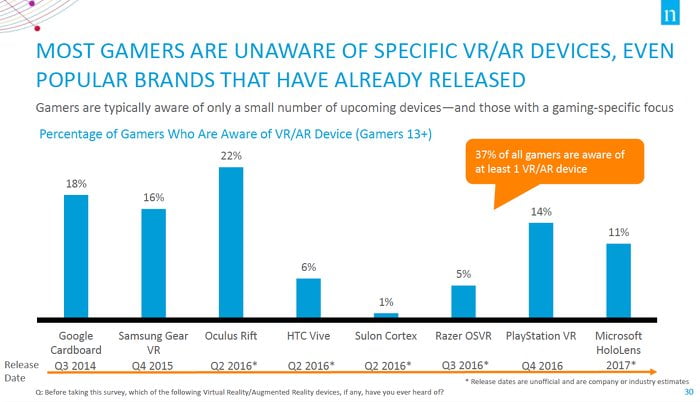 The report, based on online surveys taken by 2,000 teens/adults aged 13 and over, reveals that only 37 percent of U.S. players could name at least one VR or AR device. 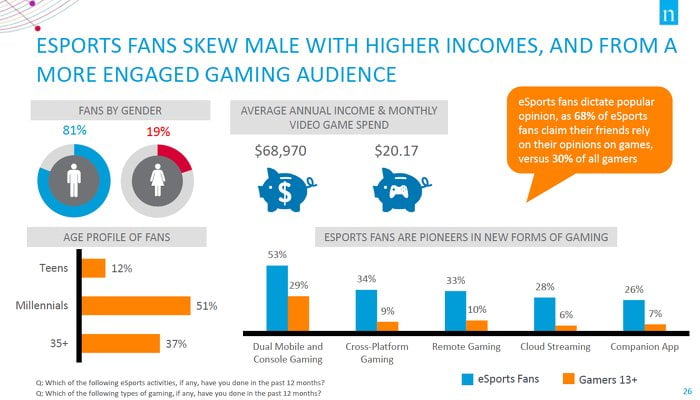 The report noted that console and mobile gamers are the ones most eager to try it out, with PC gamers drawing only 38 percent. Interested consumers of VR also tend to be well-off millennial males who draw in an average of $62,870 annually and spend close to 20 bucks a month on games. Only 15 percent teenagers, on the other hand, expressed knowledge of the tech. 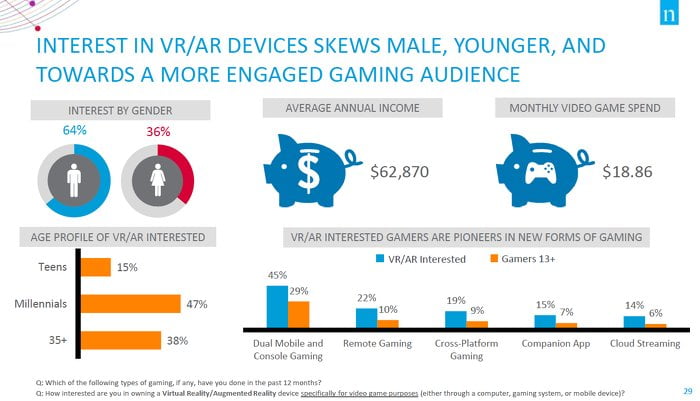 So, this is another problem, of course, for the VR industry. Looking at the consumer market in more detail, gamers and youngsters show a stronger interest in VR. The problem the ecosystem faces is that a younger target audience has very little buying power.

As you circumspect, you realize the VR platform is largely built around entertaining and creating fun experiences. There isn’t much commitment when it comes to creating virtual reality projects designed to have mechanics based on social cues, social dynamics and social interactions between players.

Not many companies agree with the mass market proposition. A VR helmet isolates the player from their environment, limits their movements by tying them to their chair, and creates a very controlled interactive experience.

There’s VR revulsion surrounding concerns over a player, being completely disengaged from the world. Unless the gaming industry promises the right kind of experience that is emotional and intense, there isn’t much hope surrounding VR hardware, at least, for now.

Sound off in the comments below.

HTC Vive – Use it to Experience Virtual Reality like Never Before