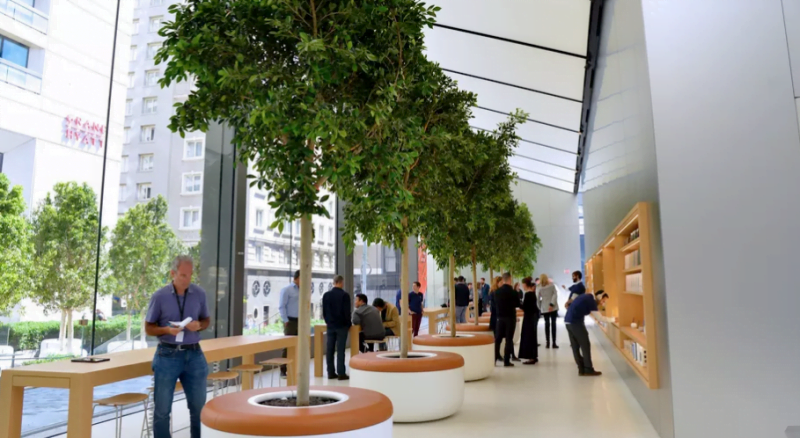 Apple’s new Union Square store located in downtown San Francisco is a work of sheer brilliance and art. The new San Francisco store of the tech giant, which is to be inaugurated on this Saturday, consists of sliding glass doors of 42-foot, which work as two-story windows, customer support segment lined up with living trees, and second floor equipped with a 6K video screen. The store also flaunts a forum on its backyard, which will be available for 24 hours per day, a green wall of 50-foot, an old fountain from Ruth Asawa, who is a sculptor from San Francisco.

The store is simply meant to impress. It illustrates both the absurd lengths iOS behemoth is willing to travel to design retail destinations, which awe-inspires and the scale of Apple’s store. The Union Square store is designed in partnership with Fosters and Partners, a UK-based firm.

The main flagship Apple store located at 1 Stockton Street in San Francisco has never been an absolutely nice place to roam around. The store is located on a busy corner, which is known for sidewalks without trees. Also, for the last couple of years, a massive construction project for Central Subway is going on outside the street. The interiors are pretty basic, but nothing quite appealing. It is slightly larger than an Apple store you might’ve come across in any malls. Sure, it gets jam-packed with line whenever a new iPhone is unveiled, but Apple CEO Tim Cook prefers making an appearance at the Apple store located in Palo Alto instead.

Apple Inc. is one of those leading companies, which shares a belief in the philosophy that anything that touches the consumers represents the company. So in a way, the design of the Union Square store isn’t mere a design. Instead, it’s a statement of ambition and passion for the best envisaged by Apple CEO Tim Cook.

Let’s have a look at how the new flagship store in San Francisco is the future of Apple Retail Stores and a statement of ambition for Apple CEO.

Everyone is busy criticizing Apple for lack of innovation in recently launched products since the iPad. In fact, there are many who consider the Apple Watch as a huge disappointment. But what everyone seems to be missing is the fact that Apple is one of those few enterprises, which continues to innovate relentlessly on existing and extremely successful business lines. Apple stores are one of the most successful retail stores in the world. There are many CEOs who might say, ‘Why take the unnecessary strain? Let it be the way it is. Actually, it’s doing quite good like this.’, but Tim Cook is not among those league. He prefers consistent makeovers to please the clients.

Apple is not Merely a Company, it’s an Experience

Time and again, Apple has never failed to convey the message that it not only sells devices but also experience. And along with time, this experience has grown better and bigger. The legacy of ‘selling of experience’ was started by Steve Jobs. It started from a device having a seamless hardware and software to wireless device – iPad, Mac, and iPhone. Ever since Tim Cook took reign of Apple in his hands, the ‘Experience’ has just grown bigger and it keeps extending. This Union square store suggests that experience at Apple is simply unlimited and it’s reaching into public life’s every aspect. It suggests unlimited ambition of Apple.

Also Read: Who is to be Blamed for Slow iPhone Sales?

How Important Is Tidal Takeover For Apple?