Car enthusiasts are already burning desires to see one of the most famous stories in the automobile industry on the silver screen when Ford v. Ferrari drops in theaters this autumn. Starring Academy Award winners Matt Damon and Christian Bale, 20th Century Fox on Sunday released the first trailer of the highly anticipated Ford v. Ferrari which is perhaps the only film about the 1966 Le Mans World Championship.

A quick recap: Henry Ford II wanted to dominate motorsports with the Blue Oval back in the early 1960s. He understood that the best way to do that would be to acquire a successful company, so he set his sights on Ferrari. Enzo Ferrari welcomed the move until the 11th hour when it was dawn on him that he could lose some control of the racing side of the business. Ford became angry and told his team to beat Ferrari on the home turf at Le Mans. 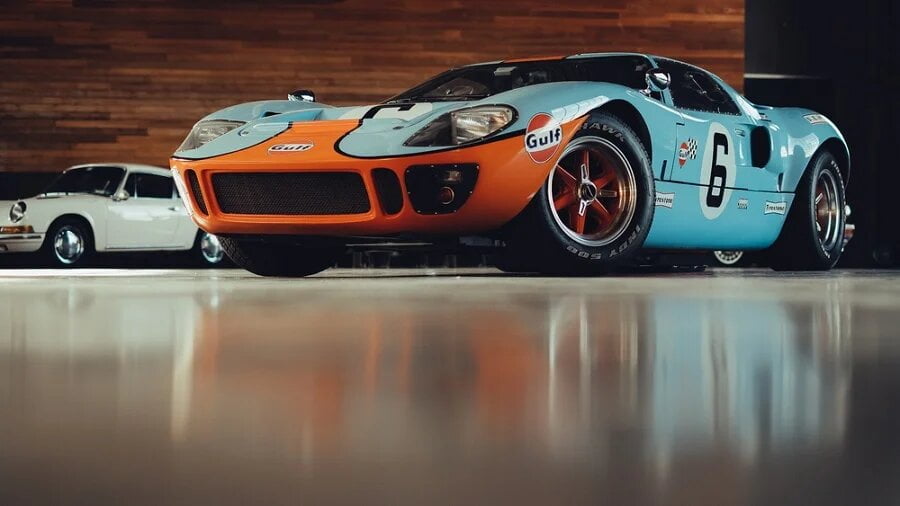 Paramus,NJ – February 18th 2017 – the historic Ford GT car sits in Classic Gulf livery. The GT was made to compete with designs of Ferrari.

Ford v. Ferrari tells the story of a maverick car designer Carroll Shelby (Damon) and his British driver, Ken Miles (Bale) who were dispatched by Henry Ford II (Tracy Letts) to build a revolutionary race car from scratch that could finally defeat the perennially dominant Ferrari at the 24 Hours of Le Mans in France. Though Ken Miles would get behind the wheel of the new Ford racing vehicle when completed, Shelby and Miles battled the laws of physics, corporate interference, and their personal demons.

A film based on these true events has for many years been in works. Fox, which is now owned by Disney, initially planned Ford v Ferrari release to be this summer but later pushed the release to this fall in other to position it better for an awards run.

James Mangold’s fans will be more excited to have Ford v. Ferrari which is the first from the American film director since after his incredible work on Logan. Ford v Ferrari trailer should do more than convincing anyone it’s definitely a top class movie. The ambitious car designer (Damon) and his fearless driver (Bale) both seem to have a full blast of their charm aside from firmly buckling the seat belt to burn tires. Damon is essentially on a top gear doing a smirking version of Tommy Lee Jones, while Bale had to lose 40 pounds of an American accent to play daring British.