Virgin Hyperloop recently conducted a first-time test of the ultra-speedy transportation system with human passengers. The test recently took place at the DevLoop test track in the desert outside Las Vegas, Nevada. According to the company, more than 400 tests were conducted on that track, though never with passengers before.

The first two passengers to travel on the Hyperloop are chief technology officer and co-founder, Josh Giegel, and head of the passenger experience, Sara Luchian. The passengers strapped to the Pegasus hyperloop pod seats and were transferred into an airlock once the air inside the enclosed vacuum tube was removed. The pod then swiftly accelerated to a fast 100 miles per hour before slowing and stopping.  The first passenger test is a remarkable achievement for Virgin Hyperloop.

The Hyperloop was founded in 2014 on SpaceX CEO Elon Musk’s vision of a futuristic transportation system.  The DevLoop test track has a length of 500 meters long and is 3.3 meters in diameter. “No one has ever attempted like what we are talking about at present,” Jay Walder, CEO of Virgin Hyperloop, stated. “This is a fully functional pod that not only will travel in a vacuum environment but will also carry a passenger.”

The Pegasus pod used for the first passenger test is also known as XP-2 and was designed with assistance from famed Danish architect Bjarke Ingels’ design firm. The pod portrays a scaled-down version of what Virgin Hyperloop will eventually be as it forms into a full-sized pod capable of carrying up to 23 passengers. the inside of the pod has plush white interiors to make it familiar to the passengers. “This is something magnificent and should be extremely comfortable for me to put my family in and send them for a visit to someplace,” Luchian stated. 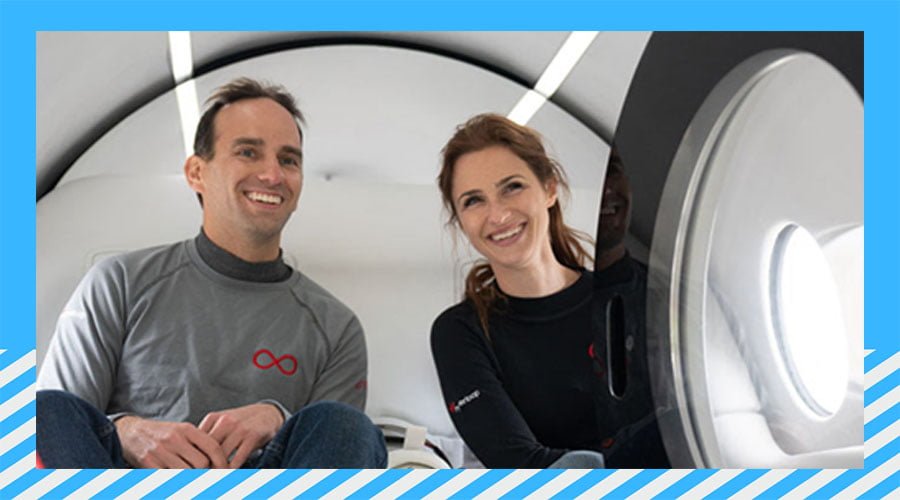 Before the passenger test, Luchian stated she was eagerly looking forward to experiencing the pod’s temperature and ventilation process’s acceleration and monitoring. Giegel stated he was looking forward to witnessing the system’s safety procedures in action and would also track whether they can maintain communication with operators during the test. “If it’s not safe enough for me, it’s not safe enough for anyone,” he stated. He also said the acceleration of the pod would be similar to a plane taking off. The pod is propelled by magnetic levitation.

However, despite the developments and the achievement so far, it wasn’t ever a smooth ride for Virgin Hyperloop. In 2017, the company settled a lawsuit with a co-founder over competing claims of harassment and sabotage. After a year, another co-founder was ousted amid serious allegations of sexual assault and misconduct. The company was also short of finance for a significant period. The Richard Branson Company helped secure a new $50 million investment from two existing investors, which helped meet the massive payroll obligations. Recently, Virgin Hyperloop also raised $172 million in new funding last year, out of which $90 million came from DP World, which previously invested $25 million in the company and has two main seats on the startup’s directorial board.

According to critics, even though the Hyperloop may be technically feasible, it is still only amounts to vaporware. The project has been a “utopian vision,” which means it would be financially impossible to achieve. The Hyperloop has still several safety questions to solve until its proper functioning.