Walmart Inc. is planning to shift part of its online order fulfilment to autonomous robots. The retail chain store plans to set up small warehouses near its already existing retail locations, which will have warehouse robots to fulfil surging online orders.

The pandemic has shifted the whole retail experience, and a major part of shopping is now done online. Giant online retailer Amazon has benefitted the most from this shift and has upgraded its logistics with greater automation, more streamlined warehousing, supply chain and delivery methodology. Others in the business are trying to follow suit.

Walmart to use warehouse robots to fulfil online orders

Walmart’s warehouses will use autonomous robots to fetch items such as boxed and frozen food for online orders. There will still be human staff that will be doing the more complex tasks of sorting and picking out fresh items like perishables and larger items.

As the warehouses will be placed right next to the stores, orders can be picked up at the store by customers or delivery workers. “This whole process can take just a few minutes from the time the order is placed to the time it’s ready for a customer or delivery driver to collect,” wrote Tom Ward, head of customer product for Walmart US, in a blog post on Wednesday. 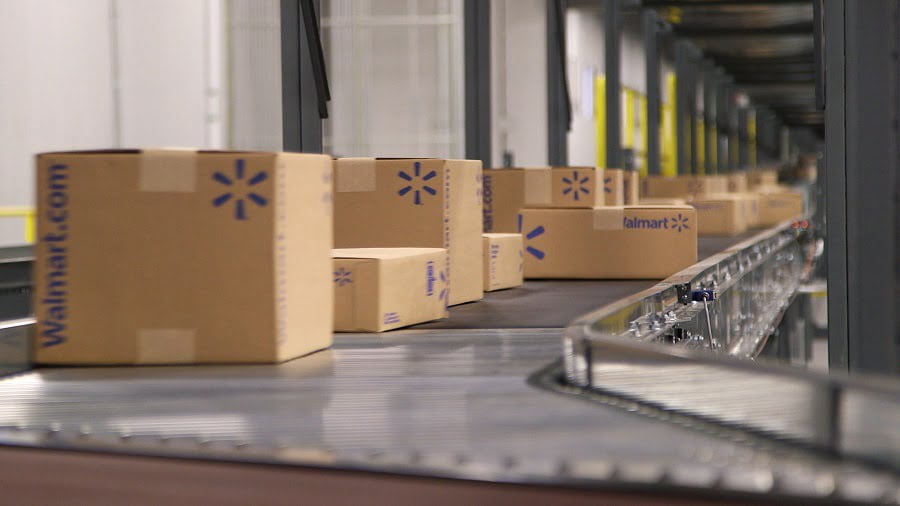 The world’s largest retailer, which operates nearly 5,000 stores nationwide, did not say how many stores will have the new centers, but said it was “planning dozens of locations, with many more to come.” (Image: Walmart)

Walmart is planning something similar to what Amazon and some fashion retailers are doing with kerb pickups and small drop/delivery and pick up stations. It plans to experiment with automated pick-up systems. Customers just need to scan the code of the item on their smartphone, and the item will be delivered to a hatch or window from where it can be picked up.

As well as handling groceries, the autonomous robots will be able to pack “thousands of the items we know customers want most, from consumables to electronics”, Mr Ward wrote.

This mover will cut down on the cost of delivery and make it more efficient. It will turn local stores into micro-fulfilment centres and cut down on the costs of “last-mile” delivery — the final, most expensive stage of an eCommerce order as it reaches a customer’s home.

There will still be human staff that will be doing the more complex tasks of sorting and picking out fresh items like perishables and larger items.

Walmart’s online sales went up 79 percent year on year in the third quarter last year. However, last-mile delivery and the need for greater warehousing space and staff have racked up the costs.

According to analysts from Jefferies, automation could reduce the cost of picking online orders by about 75 percent.

Walmart has an advantage over Amazon as it has its own brick-and-mortar facilities, which will be placed near the warehouses to fulfil orders. Amazon’s order fulfilment is dependent on far-flung warehouses.

Amazon launched Amazon Fresh last year, a new chain of grocery stores designed to work as micro-fulfilment for orders. It has nine locations across the US. “While Amazon Fresh looks and feels like a typical grocery store, it appears to function more like a distribution hub for the fulfilment of online orders,” according to a Brick Meets Click report.

Amazon already has robots involved in some of its facilities across the US. Walmart began piloting its first local fulfilment centre in Salem, New Hampshire, in late 2019. The results were impressive. The system’s speed allowed orders to be picked up or delivered within the hour.

The technology has been built in partnership with grocery robotics company Alert Innovation, Atlanta-based automation specialist Dematic and micro-fulfilment technology company Fabric, based in New York. The world’s largest retailer, which operates nearly 5,000 stores nationwide, did not say how many stores will have the new centres, but said it was “planning dozens of locations, with many more to come.”

An Associated Press report said that two stores in Texas, one in Utah and another near the company’s headquarters in Bentonville, Arkansas would be among the first.

British Warehouse Robots are coming to the US