What is Google Fi? Everything you need to know

You need to get this for your next international trip.

Google Fi is a wireless carrier that’s owned by Google. It offers unlimited calls and texts, as well as data that can be used in more than one country. If you’re interested in switching to it, you probably have some questions about what it is and how it works.

Here are the answers to your most pressing questions:

What is Google Fi?

Google Fi is a wireless carrier that uses T-Mobile and Sprint for network coverage, but also provides service on Wi-Fi networks. It is a mobile virtual network operator (MVNO), which means it doesn’t have its own network. Instead, it uses the networks of other carriers to provide service.

It’s been around for a couple of years now, and it’s certainly not a bad option if you’re looking for a phone plan. It is an MVNO (mobile virtual network operator), which means that it doesn’t actually own any cell towers — instead, it uses the networks of other carriers like Sprint, T-Mobile, and U.S. Cellular to provide service.

You can share data across devices with your family, and you can use one number for calls and texts on all your devices. It’s totally hassle-free, and there are no contracts or hidden fees. 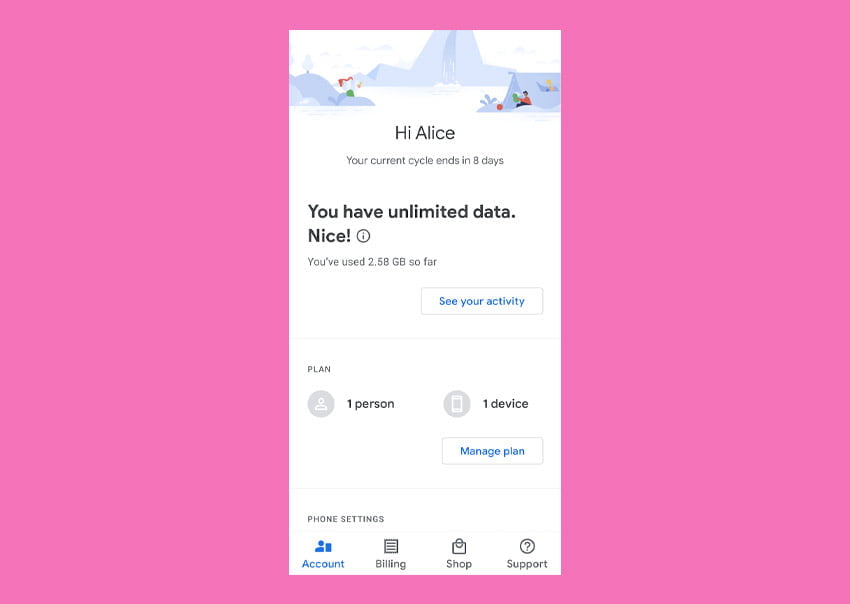 What plans does it have?

There are three Google Fi plans that are offered to customers.

The flexible plan costs $20 per month and comes as a pay-as-you-go kind of service. This is perfect for people who don’t consume a lot of data when using the internet. These users also get to pay $10 per GB for additional data used.

The second Google Fi plan is the Simply Unlimited plan. This Google Fi plan is perfect for an individual who consumes a lot of data. It costs $50 per month and has 5GB of tethering data. It comes with unlimited texting and calling in the United States. It also comes with free international calling to about 50 countries from the United States. You also get 35GB of high-speed data each month when on an international trip.

What are the best phones for Fi?

It works with any device, including Android and iPhones, but the company offers special versions of the phones they make themselves. These include Google Pixel, Motorola, and Samsung phones.

The Pixel 3 is a Google Fi phone, and it’s one of our favorites — in fact, it’s number two on our list of the best Android phones right now. It has a great camera and long battery life, plus it comes with all kinds of useful features like unlimited photo backups with Google Photos. If you’re looking for an unlocked phone with great performance at a reasonable price point, this is an excellent option for you!

What network does Google Fi use?

It uses several networks, including Sprint, T-Mobile, and U.S. Cellular. These networks have fast-speed connections and are very reliable for international trips.

What are the benefits of Google Fi?

It is a mobile virtual network operator (MVNO), which means it doesn’t have its own towers or infrastructure. Instead, it uses T-Mobile and Sprint to provide service — and the network can switch between them seamlessly if one provider has better coverage in your area. It also works with Wi-Fi hotspots, so you can use your phone without having to pay for data when you’re at home or work. It also comes with international texting and data roaming.

In addition to all those perks, it offers some unique features that make it stand out from other MVNOs:

Do I need a SIM for Google Fi?

It offers four-data only SIMS for its users, which can be ordered from its website. For Pixel mobile devices, the SIM is already built in. But for other mobile devices, you would have to request a new SIM from Google to use, or better yet take your phone to them to do it for you.

Does Google Fi use Verizon towers?

No, it doesn’t. It uses all three major carriers’ networks — T-Mobile, Sprint, and U.S. Cellular — to provide internet service. This means you can expect great coverage where those networks are available. In fact, it offers more coverage than any other carrier in every U.S. state and territory.

Does Google Fi use 5G?

For mobile devices that already use the available 5G network on T-mobile, Google fi 5G supports such devices. On the other hand, the usual 4G network is very fast and the connection is top notch for anyone worrying about a quick and reliable network connection. Hence, not having a Google Fi 5G should not be a problem.

How do I switch from my current carrier to Google Fi?

You can switch easily by visiting https://fi.google.com/signup on your computer or mobile device and following the instructions on the page to get started. You would have to open a Google Fi account in order to get started.

Google Fi is a wireless carrier that offers plans based on the amount of data you use. It uses a combination of Sprint, T-Mobile, and U.S. cellular networks to deliver service, and it uses Wi-Fi to help you connect when you’re not using your phone in areas with poor coverage. If you’re looking for a cell phone plan that’s flexible, affordable, and convenient, this might be the right choice for you.