What’s Your Next DIY Project? Try Draw This – An AI Based Camera

Clicking pictures is a delightful phenomenon – we use high-resolution cameras and phones with multi-cameras to shoot pictures, apps like Photoshop and Picsart to edit them and finally platforms such as Instagram to showcase our photography skills worldwide.

Among all these, an artist, engineer, and designer, Dan Macnish has invented Draw This, a Polaroid sort of camera, that instantly converts every picture you click into cartoons. While clicking pictures, the photographer need not remain extra cautious with advanced camera settings like focus, shutter speed, or depth of field. 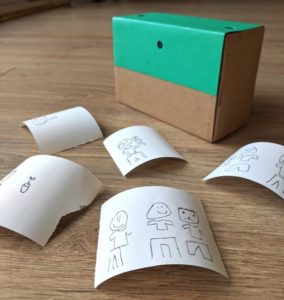 The surprise doesn’t end here. The resulting image from Draw This camera does not mirror even the slightest portion of the subject you clicked. Macnish said, “The result is always a surprise. A food selfie of a healthy salad might turn into an enormous hot dog, or a photo with friends might be photobombed by a goat.”

This is getting interesting now; let us go through the roots of this innovative gadget.

Origin of Draw This Idea

Macnish got inspired from Google’s 2016 project titled Quick, Draw! It was an online game based on neural network wherein Google users were asked to draw familiar objects and Google artificial intelligence then predicted what they were trying to draw. Well, that game ended up accumulating a database of over 50 million identified stick figure drawings across 345 categories. This doodle collection is called The Quick Draw Dataset available on GitHub.

“Playing with neural networks for object recognition one day, I wondered if I could take the concept of a polaroid one step further, and ask the camera to re-interpret the image, printing out a cartoon instead of a faithful photograph,” Macnish recalls.

For this, the engineer blended the capabilities of Google Quickdraw Dataset and Google’s object recognition technology with Python code, mapped out a million categories available in the dataset with the categories identified by the image processor. He was eventually able to convert a picture into a cartoon using the camera.

So finally, Macnish developed the Polaroid camera integrated with neural network for object recognition, powered by a Raspberry Pi processor, leveraged by The Quick Draw Dataset and packed with a thermal printer.

Using Draw This camera is fun. Though you are aware that everything coming out will be wrong, the end results are completely abstract, amusing and something spectacular to laugh at this weekend!