The RavnX is unveiled by Alabama rocket start-up Aevum and would soon be used to rocket US military satellites into orbit.

Rocket launch start-up Aevum recently unveiled the biggest drone in the world. The drone is named RavnX and is an entirely autonomous vehicle 80 feet long, has a 60-feet wingspan, and is 18-feet tall. The drone wins significantly in terms of mass, weighing 55,000 pounds when the rocket is added to it.

The drone looks almost similar to the standard aircraft and flies like a regular aircraft. The rocket use Jet A is a usual kerosene-based fuel. Jay Skylus, the CEO and founder of Aevum, stated ‘We don’t need any launch site for the drone. The only thing required is the mile long runway and a hangar. For a long time, start-up entity Aevum worked hard over the design- up to around five years in its makeshift headquarters.

CEO Skylus stated that he contemplated and thought hard on the concept a decade before when he jumped from NASA to one space start-up after another for ideas. After he got disappointed with the approaches and people’s reluctance to new ideas, Skylus scraped together any funding and collaborated with aerospace colleagues to create the drone.

Once the massive drone catches the right location, speed, and altitude, the two-stage rocket attached to it will drop, ignite within a fraction of a second and launch a roughly 100-kilograms (220-lb) payload into low-Earth orbit. This is similar to the air-launched rocket systems that were earlier developed by Virgin Orbit’s and Pegasus.

According to CEO Skylus, the un-manned drone version is more efficient and super cost-effective. ‘Aevum is bringing in a new paradigm of access to space. There’s now the ground launch system, air launch, and autonomous launch system,” Stylus stated. 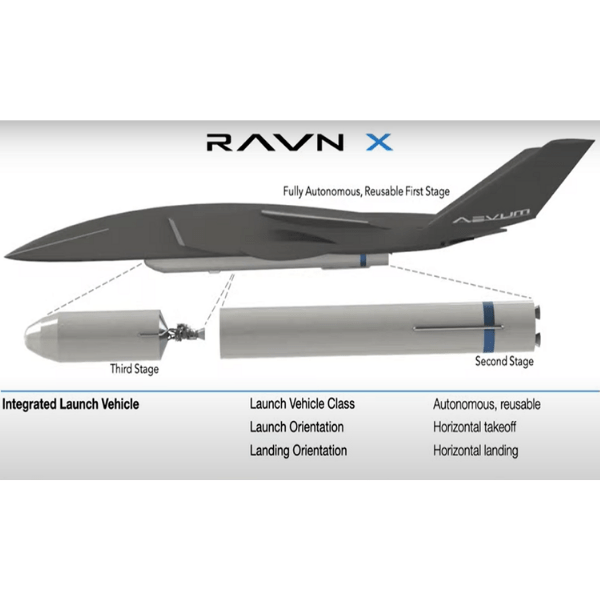 Several firms and launch start-ups are looking forward to getting their loads launched and blasted off to space. In comparison to them, Aevum has an advantage- the funding of the US Air Force. Only last year, the Department of Defense collaborated with Aevum to launch a new mission titled Agile Small Launch Operational Normalizer 45 (ASLON-45) for a whopping $4.9 million. The mission launch is to fly small, experimental satellites designed to detect adversaries’ missile launches.

Aevum pitched in the contract as it believed that it could take a tiny satellite and launch it into orbit within 180 minutes. Stylus stated that its years of intensive software development had made the process of complete requisite launch paperwork, mission profiling, payload integration, and other work more comfortable and more efficient. Due to this, Aevum needs only around 10% of the total staff required to launch rockets in other corporations.

Lt. Col. Ryan Rose, army chief in Kirtland Air Force Base’s Space and Missile Systems Center, earlier visited Aevum. “I’m extremely excited and thrilled to see the progressive, bold innovation and responsiveness of the start-up in development today by the launch industry partners to support the emerging warfighter needs,” she stated. “The US Space Force is very much collaborating with the industry to support US space venturing objectives.”

Also, Aevum and USAF together look forward to getting the ASLON-45 off the ground by mid-2021. “We are almost ready. ASLON-45 is a proactive and significant mission. We at Aevum are trying to show that it is not only the small launch vehicles that can deliver things into orbit – Rocket Lab is already doing that progressively,” Skylus stated.  We are proving the speed, flexibility, responsiveness, and operational efficiency of the launcher project. There is a new innovative architecture, and a brand-new launch vehicle that no one has earlier ever seen,’ he added.