World’s Tiniest Antenna Made from DNA

According to a new study, a group of scientists used human DNA to create the world's tiniest 'easy-to-use' nanoantenna.

A nanoantenna designed by researchers at Université de Montréal has been developed to track the movements of proteins.

The present invention is a new approach to monitoring protein structure change over time, demonstrated this week in Nature Methods. It may help scientists better understand natural and man-made nanotechnology.

The achievement has brought about truly thrilling results and optimism. As a result, reports of a startup firm being established to commercialize and distribute this nanoantenna to scientists and the pharmaceutical industry.

Nanoantennas are tiny antennas that can manipulate light at the nanoscale level. They can detect diseases or even deliver drugs directly into cells.

Nanotechnology has become a major focus of research in recent years. Scientists are developing new materials and devices that are smaller than 100 nanometers (nm), which is roughly one-thousandth the width of a human hair. These nanostructures can create sensors, drug delivery systems, and other useful tools. 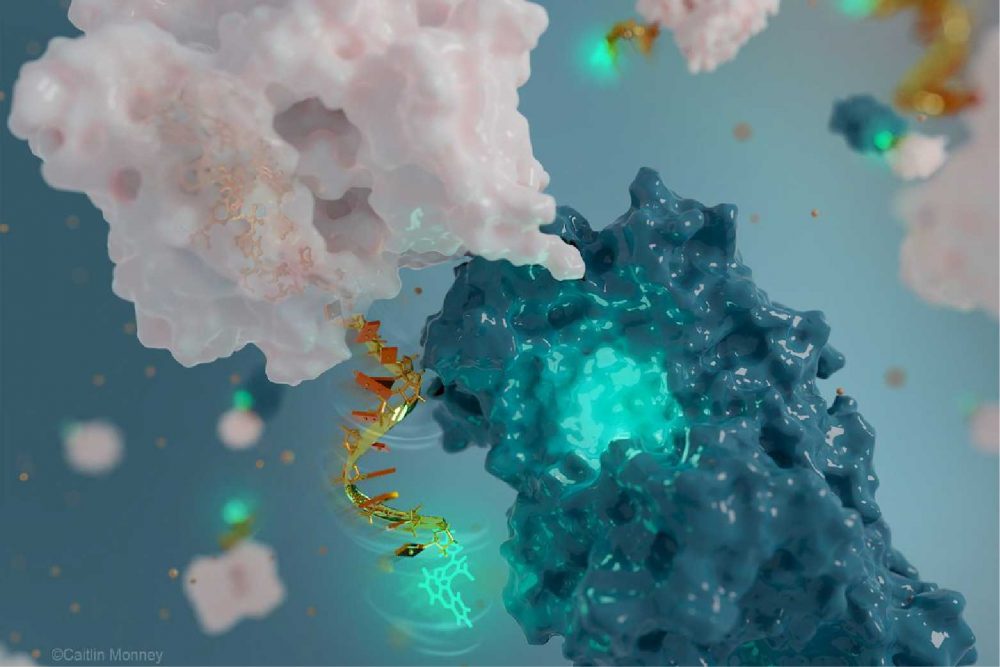 The scientists developed a DNA-based fluorescent nanoantenna that can help characterize the function of proteins, inspired by DNA’s ‘Lego-like’ features, with building blocks that are generally 20,000 times smaller than a human hair. // Image credit: Caitlin Monney

The development of nanoantennas has opened up new possibilities for medical applications. For example, they can be used to diagnose diseases, such as cancer or prevent them from occurring. In addition, these structures can also be used to deliver drugs directly into cells, which means they can treat diseases without causing side effects. Finally, scientists may use them to better understand how living organisms work.

How Does the Nanoantenna Work?

The nanoantenna is a millimeter-sized platform designed to carry biological probes to sense the movement of proteins in solution. Proteins have segments that undergo constant change due to specific internal constants. These segments have a low density, which helps in their ability to change shape with ease.

The system is highly sensitive and can sense the biomolecular force generated by changes in conformation. This data can be used to characterize proteins’ behavior in real-time. Researchers observed that these movements are constant over time using the nanoantenna.

Therefore, this technology should allow scientists to improve drug design and delivery systems for apoptosis (a process resulting in cell death), which might lead to new cancer treatments. Scientists will benefit from its use in order to better understand how cells move cargo around inside them (i.e., vesicles); it should also help pharmacologists or biologists observe protein-drug interactions.

According to UdeM chemistry professor Alexis Vallée-Bélisle, the nanoantenna works like a two-way radio. The light-emitting properties of the device enable it to communicate signals.

The receiver part of this invention makes it unique from previous nanoantennas since it is the first to use such a design. Protein structure and the interactions between protein molecules can be observed using this attachment.

How effective is it?

Scientists are certain the invention will provide many new and exciting possibilities in biochemistry, such as studying molecules and their interactions more closely.

Additionally, investigating diseases and drug discovery would be performed at a greater pace. “We can detect, for the first time in real-time, the purpose of the enzyme alkaline phosphatase with a combination of biological drugs and molecules,” said Scott Harroun, the study’s first author. “This enzyme has a lot to do with several illnesses such as gastrointestinal inflammation and cancers.”

The study of DNA has grown in popularity as a building block that we may synthesize and modulate to produce nanostructures like the antenna in this research. The chemical processes associated with DNA synthesis are straightforward to program, and once written, they are simple to use.

As mentioned earlier, the researchers are looking to maximize the success of this study. They are now looking to establish a retail firm so the nanoantenna technology can be practically packaged and employed by others in the industry. These would include medical labs, research teams, and pharmaceutical firms.