With the launch of YouTube TV, speculations have started doing the rounds about what it will offer. The service will let you access recorded and live content from major networks. It will generate content from both the big broadcasters as well as the newbie’s in the market.

This content will be coupled with the existing content on YouTube. Its major benefit is that it can be broadcasted on almost any screen where YouTube is available. Google’s internet video giant has already signed up major media companies to distribute their content on its live TV. It has features like genre search, live programming tab, DVR recording options for your favorite shows and unlimited storage space in Google cloud.

While the mobile app for Google YouTube’s live TV includes three main categories – home, live and library. You can also see a live preview for each channel while scrolling. Recording on the app is as easy as clicking the plus icon dedication to this feature. The ‘cast’ button helps you send videos to your Chromecast or a similar compatible TV.  With the help of integration with Google Home, you can also command YouTube to play a video by voice. (The attempted demo failed but we hope it was for once only.)

The live TV service by YouTube will be available at $35 per month for a family of 6 accounts with no long term contract. The price covering six accounts will let each member of the house have a personalized account with recommendations of their choices. In the beginning, it will launch in markets like New York, L.A., Philadelphia, etc., where it can offer live, local and 100% broadcast feeds.

YouTube’s Chief Business Officer, Robert Kyncl said that the video giant has partnered with all broadcast networks like ABC, CBS, NBC, Fox, etc. to offer comprehensive national coverage. It will have 30+ networks including broadcasters like CW, FX, USA, FXX, CNBC, and Disney among others. 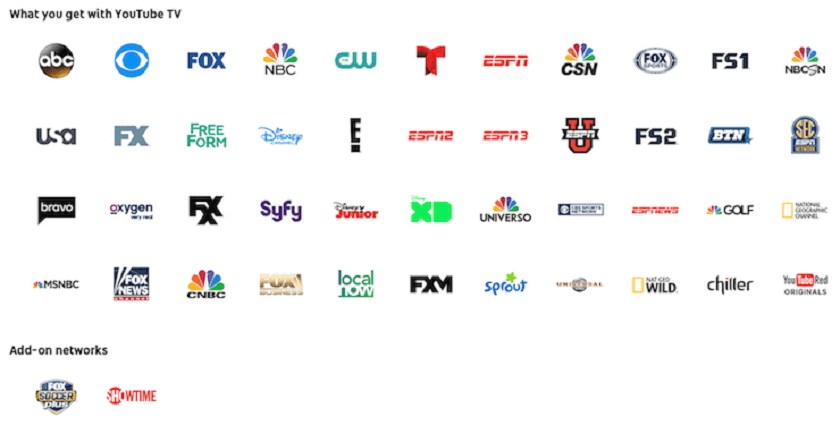 However, broadcasters like Viacom, Discovery and Time Warner are the big names that are missing from the live streaming list. This can become a major minus point. But Robert pointed out that it can change as YouTube is always in conversation with potential partners. On the positive side, YouTube is offering original content from its YouTube Red subscription service, for free.

The live streaming service has seen a great boost in the market for the last 2-3 years. This is constantly on the verge of expansion. Advertising revenues have also shifted from television commercials to online market. Millions of dollars are now flowing towards the advertisements generated for the online consumers. YouTube is one of the biggest and the only huge competition for online video providers. The YouTubers streaming with YouTube are earning crazy figures and they now have an added advantage of live TV. Many consumers are now opting out from expensive TV cable packages due to easy availability of videos and entertainment online. Reportedly, almost 40% of millennial households rely on the internet for entertainment purposes.

After gaining the number one position as an online video platform for entertainment and earnings, it is left to see how YouTube will progress in the live-streaming market. We believe that YouTube TV will have a major advantage of its already established goodwill.