The childhood fantasy of making things magically appear has turned into a reality thanks to the 3D printers. This gadget is a major breakthrough in technology even in this day and age when new inventions take place on a regular basis. Owning such a printer is quite a novelty as it is extremely expensive and its setup requires a lot of space. Recently, a tech startup has come up with an all-metal 3D printer which can fit on one’s office desk without burning a hole in his pocket. The Snapmaker 3D printer is one such device which not only caters to the need of 3D printing but also provides the features of CNC carving and laser engraving. None of the previously launched 3D printers have offered other features like the Snapmaker. This is the main plus point which will make it stand out in the growing market of printers.

The company has a crowdfunding campaign on Kickstarter which has already raised $317,018 of its target of $50,000 and yet 44 days are left for the project to get over. The project was launched on 14th March, 217 and is already a huge success. The printer is available on this site at the early bird price of $199 and will later be available at the price of $249. The CNC module and laser engraver will cost $75 each, all of these together would cost around $449. This is an impressive deal as it is difficult to attain even one of these devices at the given cost, let alone all three. The company assures that despite the cheap price, it does not compromise on quality. The 3D printing is at par with any printer worth $1000. 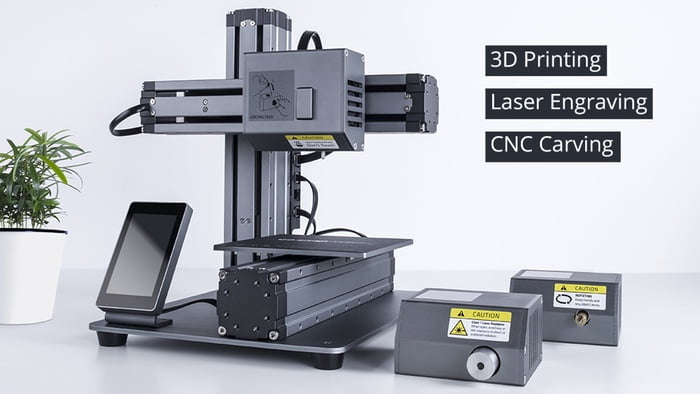 The Snapmaker 3D printer is pocket-friendly and compact.

How does the Snapmaker 3D printer work

3D printers have always been bulky in design and difficult to afford which reduced the size of its target audience. Apart from this, they are complicated to use and come with limited functions. This makes it a preferable device only for the experts. With Snapmaker 3D printer, this is not the case. Right from a beginner to a pro can conveniently use this device without the need of any special knowledge. It is easy to use for a beginner whereas an expert can adjust its settings as per his requirements. The laser engraver and CNC module assure a precise finish, without compromising on the quality of the end result. All these three features also have interchangeable heads in accordance with the design the user selects.

The Snapmaker 3D printer is of metal entirely and has aluminum alloys frame. Its compact design enables low-cost shipping, reduction in manufacturing cost, strong expandability, and quick assembly. This 3D printer can print objects up to the size of 125 x 125 x 125mm at 50-300 microns resolution. The laser engraver offers a 500mW beam which is compatible with leather, bamboo, wood, plastic, paper, and fabric. The CNC module is capable of carving acrylic, wood, and PCB at the speed between 2,000 and 7,000 RPM. The device will mostly be shipped by month of September 2017.