This Piece of Tech Translates Sign Language into Speech

As technology aims to make the human life better, it is time we concentrate on bigger breakthroughs instead of innovating devices that make everyday life more convenient which in the end makes us lazier. Technology can help us find a way to reduce physical impairments as much as possible. In the case of a hearing or speaking impairment, such people use a different medium of communication which is not understood by a majority of people. To curb this problem, two undergraduate students from the University of Washington have come up with a device which can translate sign language into normal spoken words. SignAloud translates such hand gestures into spoken or written text.

It is quite a task for a person with speaking impairment to interact with other people on a regular basis. This is because selective people have enough understanding about the sign language. Remember how you feel when you need something in a foreign country and nobody understands your language? This is what people with speaking impairment go through every single day. These innovators have invented a pair of gloves which can translate sign language to enable communication between two individuals who don’t have the same medium of communication. If this works as promised, it might prove to be a major breakthrough as a sign language translator. 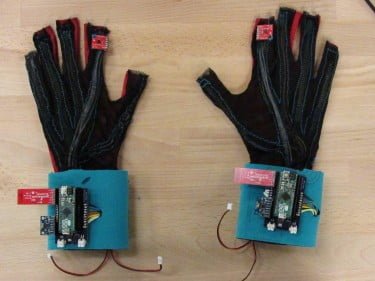 SignAloud is a sign language translator, the basic apparatus for which is a pair of gloves. These gloves are not the ordinary ones we use on a regular basis. They have the ability to recognize hand gestures based on the American Sign Language and translate them accordingly. The gestures are translated to the words or phrases of the English language which match with the gestures. The main selling point of these gloves is that they are lightweight and compact. This means that one can wear them on a daily basis just like contact lenses or hearing aids.

The working of the SignAloud gloves is quite simple but the scientific principles are used at the right places to make such a useful device. The glove has sensors installed at the right places which record the movement of the hand. Of the basis of the data recorded, data is wirelessly sent via Bluetooth to a central computer. This computer matches the given data to different sequential statistical regressions. As soon as the gesture matches the data, it says it out loud through the speaker.