Months after announcing that it would bring original content to its platform, Facebook has officially introduced Watch, a new platform for users to watch original TV shows and live content. For television viewers, that will mean the addition of yet another destination for entertainment and more.

Facebook Watch, the much-awaited update to its video section will include short episodic shows that Facebook didn’t have before. The new tab on Facebook will showcase shows slated to debut on August 28. As of now, 40 shows from a range of publishing partners and content studios will be included in the first slate of programming. The social media giant is paying publishers like ATTN, BuzzFeed, and Group Nine Media to make these shows.

The shows will have their own dedicated Facebook Pages. Moreover, original show creators can even set up special show groups where fans can ask questions and geek out over fan theories.

Earlier this year, CEO Mark Zuckerberg expressed his desire to create a place where people “watch episodically week over week.” On Watch, publishers can choose to insert ad breaks if they want to earn more money off their original TV shows. Although, the guidelines and where and how long the ads can be are yet to be finalized. The big question is – will viewers sit through ads?

The beauty of social media is that anyone with a decent video camera and an idea can create a show on pretty much anywhere like, YouTube or Vine. Moreover, it’s a lot cheaper to create media rather than trying to compete with big budgeted companies like Netflix and Hulu. By opening Watch to anyone, Facebook might risk diluting its efforts to produce high-quality content and eventually lose to other platforms. Will Facebook make publishers pay for better placement?

Facebook wants to take a proven approach to lead to more videos on its platform. It’s nothing more than YouTube for people who incessantly scroll through their feed. We don’t need another YouTube.

Facebook Watch will initially release to a small test group of users. The social media giant plans to launch it out to all U.S. users in the next few weeks or months. 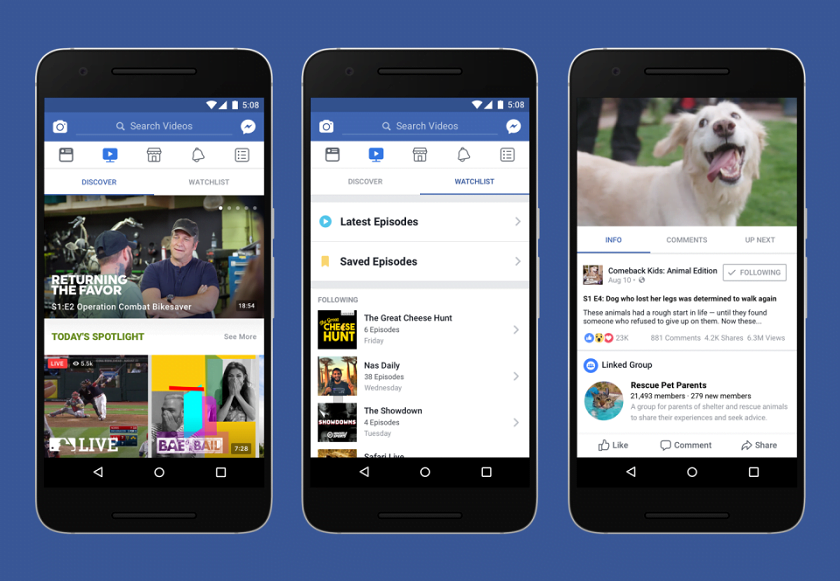 Here’s a list of original TV shows you would be able to view on Watch:

A&E’s Bae or Bail: Would your boyfriend save you if you were thrown in a tank full of piranhas? Unsuspecting couples are thrown into terrifying scenarios.

All Def Digitail’s Inside the Office: A well-crafted workplace comedy that shows eccentric companies identify crisis and sail through each one.

…and the list goes on. There are plenty of mini-documentaries, sports coverage and reality shows. What’s missing from the list is longer-form scripted dramas and comedies people are used to watching on Netflix and Hulu.