When Microsoft launched the new Surface Book 2, it made the MacBook look ordinary. The tech giant is maintaining its accord with an upgraded entry-level Surface 2 which includes the latest Intel 8th gen quad-core i5 processor. It includes an i5-8350U which increases the system’s speed to 3.6 GHz and a storage of 256GB. This new upgrade can be found in the 13.5-inch Surface Book 2 model at a market price of $1,499.

The new Surface Book 2 continues to be a pioneering piece of technology which blends the convenience of a tablet with the versatility of a laptop more seamlessly and successfully than most 2-in-1 laptops. The 7th gen processor in the Surface Book 2 is still available in the market at a discounted price of $1,299.

Other than the performance tweak, the Surface 2 has the same design and engineering as its predecessor. However, this new model is thinner and lighter than the previous one.  It features a two piece design, a sleek tablet and a removable keyboard joined with a sturdy docking system. The 13.5-inch is designed for both pen and Surface Dial on-screen interaction. A major difference between the 13.5-inch and the 15-inch, other than the obvious screen differences, is that the 13.5-inch is a fan-less system. So, Microsoft has launched a system that is thinner, lighter, more powerful and silent. 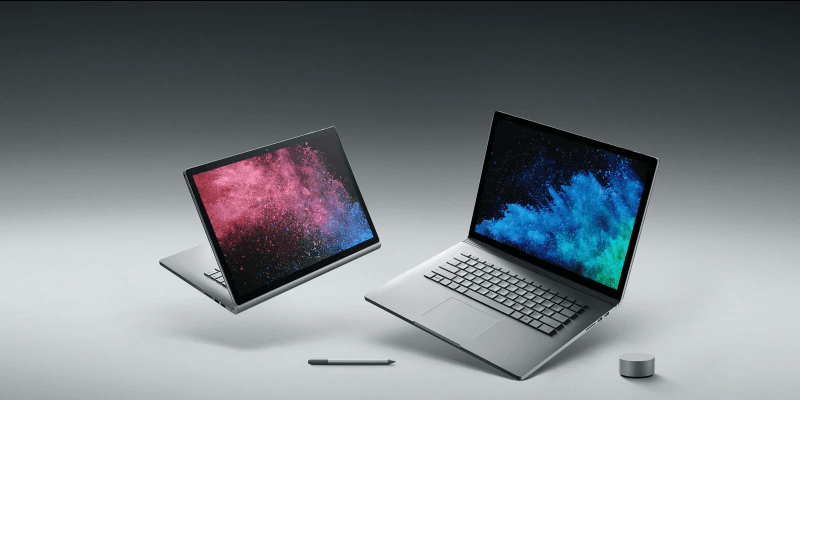 The keyboard is responsive, has agreeable backlighting with three lighting options. The touchpad is Windows Precision Touchpad compliant, so it allows the same precision touch gestures as seen in the systems running on Windows 10. The screen can be detached with the push of a button or can be flipped into a tablet. The screen provides a stunning Pixel Sense display with a resolution of 267 ppi and is large enough to convert into a Surface Studio that allows for an immersive artistic experience using the Surface pen.

The graphics of the new Surface Book 2 is created a new milestone for the companies claiming to produce good 2-in-1 laptops. The latest Intel Core processor and NVIDIA graphics offer the best graphics in the 2-in-1 segment and many perceive it as the best surface for gaming. The 13.5-inch screen with 3:2 aspect ratio gives plenty of space to be used as a canvas for creative endeavors or to work through the many apps that Windows 10 has to offer.

The new processor goes a long way in increasing the battery life of this system which clocks in at an approximate 13 hours of running time.  The connectivity features are robust and include a 3.1 USB, full-sized SD card, and a Surface Dock. Users can use the USB-C port as a single connector to charge the device, transfer files or connect with external devices. The keyboard area carries all the connectivity channels except the headphone jack and the SD card.

Microsoft is holding a Surface event in New York City on April 17th and we are anticipating that the company might reveal its Surface Hub 2S plans and more information about its Surface lineup.